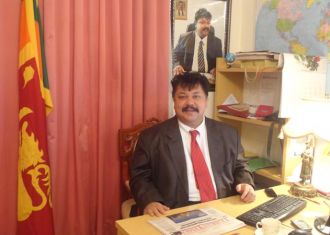 TEHRAN – The Sri Lankan ambassador to Iran says his country is keen to revive trade with Iran in light of the easing of sanctions against Tehran and believes that the two countries have great potential to strengthen their ties in various areas, including the construction and tourism sectors.

Mohamed Faizal Razeen, who submitted his credentials in February 2013, made the remarks in a recent interview with the Tehran Times, during which he commented on a range of issues, including the infrastructure development in Tehran, Sri Lanka’s natural beauty, and the books he has written.
Razeen, who hails from a family of lawyers, had served as a leading criminal lawyer and an acting judge for 25 years before he was posted to Iran.

He has served at various statutory bodies and boards, such as the Central Freight Bureau of Sri Lanka, Lakdiva Engineering Company, the Welfare Benefits Board, National Transport Medical Institute, and Gem and Jewelry Research and Training Institute. Razeen was also a member of the Presidential Commission on Human Rights and served as a prime ministerial advisor.

Razeen was born in the southern Sri Lankan city of Hambantota, which was hit hard by the 2004 Indian Ocean tsunami.

Deeply saddened by the loss of his brother and 80 members of his family in the tsunami, he established Peace Force NGO, which has been implementing a number of projects to help the people affected by the tsunami.

Razeen, who had donated six acres of his own land for the construction of houses by the affected people in his home town, has been the driving force behind two major post-tsunami, privately funded building projects, namely Tsunamigama and Razeenpura.

Razeen’s appointment as ambassador to Iran gave him his first experience as a diplomat, which he says is a “big responsibility, nationally and internationally.”

Asked about the significant measures he has taken to help strengthen relations between Tehran and Colombo, the ambassador fondly remembered the special gift that his country presented to Iran in 2013.

“Within the first months of my tenure, I arranged for the transfer of two elephants” to Eram Zoo in Tehran, Razeen said, calling it a “good start”.
Razeen had also taken the initiative to establish the Iran-Sri Lanka Friendship Association, which later set up Rahmat Charity Institute with the blessing of the Imam Khomeini Relief Foundation.

The ambassador added that the holding of the 10th session of the Iran-Sri Lanka Joint Economic Commission in January, which was attended by Sri Lankan Minister of Industry and Commerce Rishad Badurdeen, was a “great achievement”.

During the session, the two countries signed a memorandum of understanding (MoU) on the expansion of bilateral economic cooperation.

“When I came to Iran, we had this sanctions problem, and we could not do anything,” Razeen said, expressing hope that bilateral trade would return back to normal as a result of the six-month interim nuclear deal between Iran and world powers.

The interim agreement, which came into force on January 20, granted Iran a limited easing of the sanctions in return for temporary constraints on its uranium enrichment and nuclear development.

Sri Lanka is keen to resume importing oil from Iran as Iranian crude is best suited for the country’s refineries, Razeen said, echoing the Sri Lankan minister of industry and commerce who said in January that Colombo is interested in continuing oil cooperation with Iran.

Commenting on a $250 million oil debt to Iran that Sri Lanka has failed to pay off due to restrictions on financial transactions involving Iran, the ambassador said that Sri Lankan officials have been mulling over some “practical” ways to clear the debt.

Sri Lanka plans to spend the money on a $500 million tunnel construction project in the country which former Iranian president Mahmoud Ahmadinejad had pledged to fully fund, Razeen said.

Technical discussions are underway in this regard, he added.

During the interview, Razeen, who is also accredited to Turkmenistan and Azerbaijan, described the infrastructure in Tehran, including its roads, tunnels, and buildings, as one of the best in the world.

There is potential for the implementation of joint infrastructure development projects, the ambassador said, adding that he has been making efforts to promote cooperation between the private sectors of the two countries in various areas.

“We need Iran and are keen to do lots of business with Iran.”

Razeen said that he expects an increase in the volume of trade between the two countries during the next one or two months. “We are working on that.”

He went on to say that tea, garment, flour, coconut powder, and rubber are the main commodities exported from Sri Lanka to Iran, while tar, gasoline, dates, and fruits form the bulk of Iran’s exports to the South Asian country.

According to the Tehran Chamber of Commerce, Industries, Mines, and Agriculture, the volume of annual trade between the two countries during the last Iranian calendar year, 1391 (March 20, 2012 – March 20, 2013) stood at about $234 million.

Razeen believes that there is untapped potential in many parts of Iran, including Bandar Anzali in the northern Gilan Province and Kish Island in the southern Hormozgan Province, which, if utilized, can pave the way for further cooperation.

He visited both Bandar Anzali and Kish Island in 2013.

Sri Lankan tea is exported to Gilan Province, the ambassador said, adding, “We plan to establish a tea research center in Gilan.”

He also said that Kish authorities are very interested in developing the island, which is of immense importance given the fact that it is a free trade zone and is close to Bandar Abbas, Iran’s major port.

Razeen also spoke about Sri Lanka’s natural beauty which attracts many tourists every year and his plans, as ambassador, to make the Iranian people more familiar with his country.

Sri Lanka is one of the fastest growing countries in Asia and is now a safe country thanks to the efforts of President Mahinda Rajapaksa, aptly called the “Lion of Asia”, who “rooted out terrorism” in the country, the ambassador said, referring to a 30-year civil war, which ended in 2009.

Since then, the country has witnessed dramatic changes and has undergone rapid socio-economic development, he said.

Now the infrastructure is there to welcome those interested in visiting Sri Lanka, Razeen said, admiring the enchanting beauties of his country.

Within a few hours, you can experience different weather conditions, he said, with a smile on his face.

“This is the time Iranians should come to Sri Lanka,” Razeen said, explaining that preparations are underway to send a batch of 200 Iranian tourists to southern parts of his country as part of a plan to attract more tourists from Iran.

The Sri Lankan ambassador has written a number of books, including one about Imam Hussein (AS) entitled ‘Every Day is Ashura, Every Land is Karbala’ and another book entitled ‘Jihad’.

Sri Lanka is a multi-religious country. The majority are Buddhist, and Hinduism and Islam are the second and third largest religions in the South Asian country respectively.

Razeen is a Sunni Muslim, but says he remembers his father shedding tears when telling his children about Ashura, the day Imam Hussein (AS) and his 72 companions were martyred.

“There is no difference between Shias and Sunnis, and neither is superior to the other,” he said, adding, “Islam is peace.”

Razeen also said that he believes humanity comes above everything else in all religions.

About his other book ‘Jihad’, the ambassador said that he wrote it to convey the message that jihad is “refraining from bad deeds.”

Razeen also commented on the social status of women in Iran and said that it was a pleasant surprise to see that Iranian women have such a high position in the society.

“I did not expect that,” he said, adding that Iran can be a good “role model” for other Muslim countries.

On Sri Lanka’s relationship with two competing regional powers, India and China, Razeen said, “We are lucky to be close to these two countries.”

“They are like our brother and sister,” he said, adding that Sri Lanka’s ties with its “good neighbors” will be enhanced in the future.

Sri Lanka is seeking to maintain friendly ties with all countries, the ambassador said.

Asked about the fact that the Sri Lankan government has been accused of violating human rights, Razeen said President Rajapaksa, who is “a brilliant lawyer and very experienced in politics,” will tackle the issue “tactfully”.