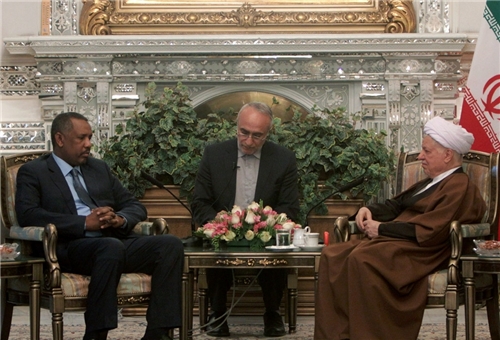 TEHRAN (FNA)- Chairman of Iran’s Expediency Council (EC) Akbar Hashemi Rafsanjani and Sudanese Parliament Speaker Fateh Ezzedin Mansour stressed the need for the consolidation of the bilateral relations between the two Muslim nations in all domains.

Mansour, for his part, congratulated 35th victory anniversary of the Islamic Revolution, describing Iran as source of hope for the oppressed nations in the world and a main support for the Muslim World.

He voiced his country’s preparedness to promote ties with the Islamic Republic of Iran in all the fields.

Iranian and Sudanese leaders have frequently laid increasing emphasis on the expansion of ties and cooperation between the two nations.