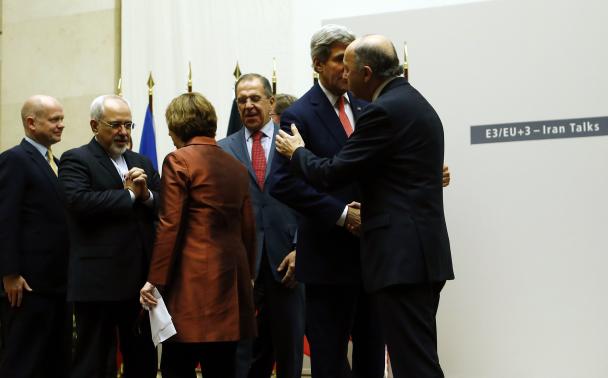 WASHINGTON — International diplomacy with Iran over its controversial nuclear program enters a thorny phase as on Tuesday when negotiators from Iran and six world powers gather for talks in Vienna.

Just three months ago in Geneva, there were smiles and optimism when Iran and the so-called P5+1 — Britain, China, France, Russia and the U.S., plus Germany – agreed on an interim nuclear deal, which called on Iran to put curbs on its nuclear program in exchange for limited sanctions relief.

The agreement went into effect January 20, setting in motion an ambitious six-month countdown during which the sides must negotiate a comprehensive deal that would ensure Tehran cannot build nuclear weapons in exchange for an end to the international sanctions that have battered Iran’s economy.

But the initial optimism has waned, with U.S. President Barack Obama signaling the United States is only willing to go so far. There are major questions as to how much Iran will give in and how much the West will tolerate.

“Next week’s talks in Vienna will be an opportunity for Iran to show that it is serious about a comprehensive solution that assures the world that its nuclear program is for peaceful purposes only,” Obama said last week during a news conference with French President Francois Hollande.

“If they meet what technically gives us those assurances then there’s a deal to be potentially made,” he said. “If they don’t, there isn’t.”

“The movement of the Iranian nation towards the peaks of scientific and technical progress and advancement, including peaceful nuclear technology, will be forever,” Iranian President Hassan Rouhani told thousands of Iranians packed into Tehran’s Azadi Square for a speech marking the 35th anniversary of the Islamic revolution.

Rouhani also dismissed the notion that world powers – and Israel – would ultimately resort to military action against Iran.

“I say explicitly to those delusional people who say the military option is on the table, that they should change their glasses,” Rouhani said. “There is no military threat against our nation on any table in the world.”

“The biggest obstacle will be in satisfying both sides that they’ve given just enough to reach agreement,” former U.S. Ambassador Richard LeBaron told VOA. “We’re going to need quite a bit more than the Iranians have envisioned so far in terms of assurances and in terms of intrusive inspections.”

LeBaron believes that will be a tough sell in Tehran, where some officials and hardline politicians may find such an impingement on Iranian sovereignty completely unacceptable.

Severe doubts about reaching an acceptable, comprehensive deal also continue unabated in the West, where some U.S. lawmakers have argued the threat of further sanctions against Tehran would strengthen Washington’s hand in the upcoming negotiations.

Republican Senator Marco Rubio, who has supported additional sanctions, points to Iran’s continued pursuit of ballistic missile technology — which could be used to deliver a nuclear weapon — as a sign Iran is not serious about a deal.

That type of rhetoric has not gone over well with Iran, which has said it would view any new sanctions as a violation of the interim agreement.

Establishing a level of trust necessary for a final deal will likely be difficult, despite the ability of all sides to reach the interim deal, analysts say.

“Success in the past doesn’t guarantee success in the future, though, especially since Iran learns from being caught, learns to hide things better,” said analyst David Albright.

Albright, a former nuclear inspector who has testified about iran multiple times before the U.S. Congress, warns a key problem remains: enforcement.

“The focus has been on getting to a deal somehow and then what would be in it and then will Iran implement it,” he said.  “Can you catch cheating?”

But some analysts say economic sanctions have already taken such a toll on Iran that a final nuclear deal may be inevitable.

“If President Rouhani wants to ensure a meaningful economic recovery for Iranians he is going to have to come to the negotiating table and meet the demands of the international community,” said Mark Dubowitz, executive director of the Foundation for Defense of Democracies.

Already, the easing of some sanctions has had investors starting to explore opportunities in Iran, which hosted a delegation of French businessmen recently.  Iran has been actively looking for loopholes in the sanctions, reaching out to Turkey and Russia.

Still, Obama has warned Washington will ‘come down like a ton of bricks” on any companies or individuals who violate the many sanctions that remain in place.

And earlier this month U.S. Under Secretary of State for Political Affairs Wendy Sherman warned of the high stakes facing Tehran.

“If it fails to live up to its commitments, or if we are unable to reach agreement on a comprehensive solution, we would ask Congress to ramp up new sanctions immediately,” she said.

This article was written by Jeff Seldin for the opinion page of Voice of America on February 16,2014.Jeff works out of VOA’s Washington headquarters covering a wide variety of subjects, from the nature of the growing terror threat in Northern Africa to China’s crackdown on Tibet and the struggle over immigration reform in the United States.