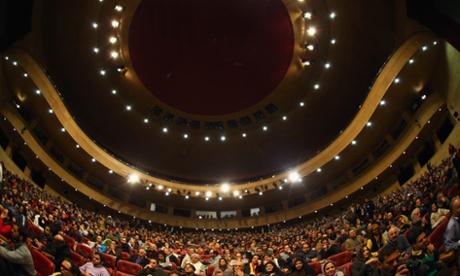 Accusations of sedition and vote rigging are stirring resentment at both ends of the political spectrum as the Iranian public digests the cataclysmic close of the Fajr Film Festival, a closely watched annual event that reflects not only state of the country’s film industry, but the mood of society as a whole.

The dearth of an open and inclusive forum for often-conflicting cultural views makes Iranian cinema a rare outlet for broad-based debate on pressing sociopolitical topics. In recent days, it has become an ideological war zone as regime hardliners clash with proponents of a more open cultural policy that tolerates the critical views of young filmmakers.

Each year, some 1.5 million people attend Tehran’s Fajr festival, which showcases the works of popular filmmakers working in Iran and includes a closing awards ceremony timed to coincide with the anniversary of the 1979 revolution. The constraints of censorship, pervasive throughout the cultural scene, mean that both the organizers and the audience place a high value on the “People’s Choice” award, which is considered representative of the tastes of the public at large. Throughout the festival, each participating cinema is equipped with heavily guarded ballot boxes where audience members cast votes for their favorite film.

The state broadcaster IRIB, which has a monopoly on local TV networks, regularly covers the awards ceremony live as the vote results are announced. This year, however, IRIB interrupted its broadcast four times in 90 minutes as film industry luminaries voiced their disenchantment with the systematic exclusion of films that appeared to cross the establishment’s ideological red line.