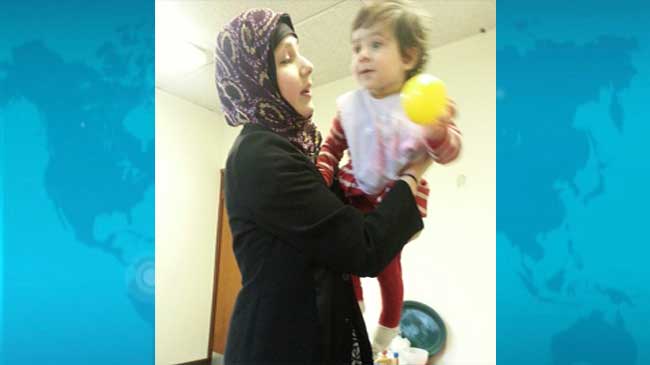 An Iranian man living in Northern Ireland has told Press TV that his 4.5-month-old daughter has been “abducted” by British social workers for nearly a year now, simply because his wife wears a headscarf.

Khosro Qanbarian Alavijeh, who has lived in Northern Ireland for over three decades, said on Saturday that the baby was being breast-fed at the time she was taken away.

He added that he has filed a formal complaint against the “kidnappers”, but to no avail.

“Our daughter Hannah Rosemary Fatimah Alavijeh has been kidnapped and is held as a hostage on grounds of her mother wearing a headscarf and accepting Islam as her religion as well as myself being an Iranian Muslim,” Qanbarian Alavijeh said.

He added that he had to change his first name to Ricardo to avoid discrimination and social profiling.

Qanbarian Alavijeh said he and his wife, a Muslim from Northern Ireland, have been accused of spreading Islamic beliefs.

“We want justice for ourselves and our daughter,” he said and stressed that he has recorded the voice and video of social workers, who took away his baby, stating that the action was directly related to the parents’ religious sentiments.

Some experts say Hannah’s case is just the tip of an iceberg.

“There is a growing trend of Islamophobic attacks on Muslim immigrant families in Europe, particularly in the UK and France. Those governments are so scared that they cannot even tolerate a headscarf. They are scared because they can clearly see more and more people are converting to Islam,” said Hamid Reza Emadi, Press TV’s newsroom director.

“But Europe must accept the reality and embrace Islam as the fastest growing religion not only in Europe, but also in the world,” he added, stressing that Islamophobic laws, such as the one banning Hijab in France, could only exacerbate radical sentiments within Europe’s ever-growing Muslim community.

In March 2013, a group of social workers stormed Qanbarian Alavijeh’s house and took his baby daughter away.

He said the child has been separated from the family under a scheme called Social, Psychological and Dietetics, Cultural, Religious and Sexual Programming of a Baby.

“What these criminals have committed is an act of terror on a four-and-a-half-month breast-fed baby. Hannah was terrorized in front of me. I took the video of her abduction and posted it on YouTube before being told by my previous barrister to remove them in return for my baby’s release,” he said, adding that he removed the images but the baby was not reunited with the family.

“They told me the judges are on holiday!” he said.