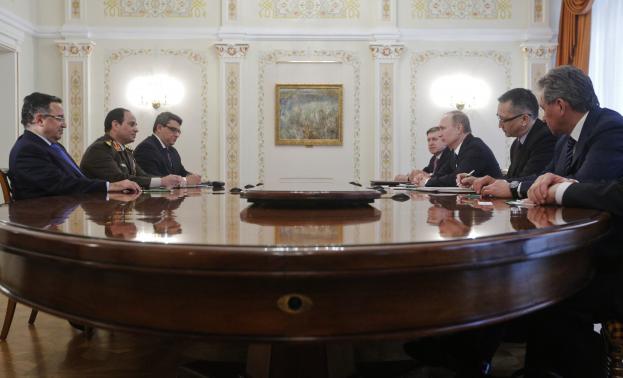 Russia is looking to take advantage of strains between Cairo and Washington, which has withheld some of its annual aid to Egypt after Sisi ousted Egypt’s first democratically elected president Islamist leader Mohamed Mursi last year.

Sisi, 59, has been urged to run by members of the public who reject the Islamist government he toppled, and by members of the armed forces who want a president who can face down growing political violence. Earlier this month, a Kuwaiti newspaper quoted him as saying he would run in an election expected to be held in April.

“I know you have decided to run for president. This is a very responsible decision, to take upon yourself responsibility for the fate of the Egyptian people,” Putin told Sisi.

“I wish you luck on my own behalf and that of the Russian people,” he said.

Foreign Minister Nabil Fahmy said last year that Egypt would look beyond Washington and keep its “options” open to meet its security needs.

Russia is currently negotiating an arms contract with Egypt that Moscow-based defense think tank CAST has estimated at $2 billion. Moscow says it lost tens of billions of dollars in lost defense contracts after “Arab Spring” revolts toppled Moscow-friendly leaders in the Middle East and North Africa.