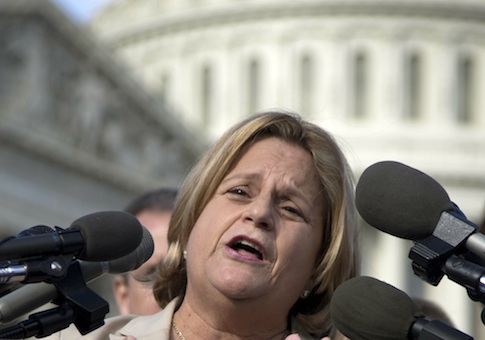 A leading House lawmaker is calling on President Obama to publicly release the full text of the recently signed Iran nuclear deal, which is currently being held under lock and key in a secure compound on Capitol Hill.

Rep. Ileana Ros Lehtinen (R., Fla.), a leading member of the House Foreign Affairs Committee, wrote to Obama on Wednesday in a bid to force the Iran deal into the public.

The precise details of the deal have remained “shrouded in secrecy” despite the critical nature of the agreement, Ros-Lehtinen said.

The White House has come under increasing fire from lawmakers and others for refusing to publicly release the text of the deal. Lawmakers and qualified Hill staffers must submit to an extensive security procedure just to view the text, which is being kept hidden from the American public.

The deal was even kept from members of Congress until the last moment, according to Ros-Lehtinen.

“While the administration released an outline to the public of what the deal entailed, it was not until just days before implementation that the full text of the agreement was made available for members of Congress to review,” she wrote.

“While you and members of your administration have touted the significance of this agreement, the fact is that you have provided only some of the details to the American public while keeping the rest shrouded in secrecy,” the letter states.

The secrecy surrounding the deal has prevented Congress from providing critical oversight on the negotiations with Tehran, according to Ros-Lehtinen.

“In order for Congress to properly perform its oversight functions and for the American people and our allies to have a full and open debate on the issue, I respectfully request that you make public the full text of the” deal, she wrote.

As the deal text stays hidden in a secured office of Capitol Hill, Iran has “developed [nuclear] centrifuges that are 15 times faster than what they currently possess and claimed to have successfully test fired to long range missiles,” Ros-Lehtinen added.

Due to Iran’s increasingly confrontational actions, as well as the White House’s continued refusal to release the deal, Ros-Lehtinen asks that Obama “take ever effort to make the full text” public to the “American people so they can judge for themselves the merits of this deal.”

The Washington Free Beacon reported on Wednesday that those seeking to view the deal must pass through many layers of security—even though the deal is technically marked as “unclassified.”

“Anyone eligible to view the document must make their way to the Senate Security Office in the Capitol Visitor’s Center,” a senior Senate source told the Free Beacon.

There, members of Congress and staffers with a secret security clearance must relinquish their cell phones and all other devices before they are led into a private viewing room to read the text.

“No photocopies are allowed, no photos can be taken, and remember, your Blackberry or iPhone is sitting outside” the room, the source said. “Upon completion of review, you must sign it back in at the desk before leaving.”

The White House also has the ability to find out at any time who had viewed the deal and when, the source said.