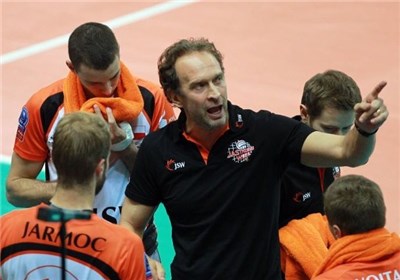 TEHRAN (Tasnim) – Jastrzebski Wegiel coach Lorenzo Bernardi said that the Iranian volleyball officials were in a hurry to announce his name as head coach of their team.

Last week, Julio Velasco, informed the Iranian volleyball federation that he is going to step down as coach of their team.

Iran volleyball officials subsequently negotiated with some big coaches such as Lorenzo Bernardi.

President of Iran Volleyball Federation, Mohammad Reza Davarzani, on Sunday said that they have reached an initial agreement with the Italian coach to take charge of the volleyball team until the 2016 Olympic Games.

It’s while Bernardi has told the Italian media that he has not signed any contract with Iran Volleyball Federation.

“At the moment, I don’t want to talk about the matter because I am concentrated on our matches in Poland volleyball league. I have not signed any contract with Iran,” Bernardi told La Gazzetta dello Sport.

Iran has been drawn in Pool D of the FIVB Volleyball Men’s World Championship along with Italy, Belgium, and France.