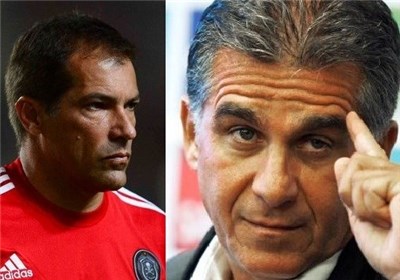 TEHRAN (Tasnim) – Former Orlando Pirates coach Roger de Sa has confirmed that he will likely work with Carlos Queiroz at the 2014 World Cup in Brazil.

Roger de Sa, who parted company with  Orlando Pirates in late January, has been linked with the Urban Warriors, as well as Ajax Cape Town and Bafana Bafana assistant position.

“I’ve been doing a bit of work for Iran and I might go to the World Cup in Brazil.”

“How many local coaches do you know that get a chance to go to two World Cups? I’m sure not many, but I could go and assist Queiroz and it would be a privilege,” Roger de Sa told Kick off.

Roger de Sa has already worked with his Carlos Queiroz in South Africa football team from 2000 to 2002.

Iran football team is in Group F of the FIFA 2014 World Cup along with giant Argentina, Bosnia and Herzegovina and Nigeria.

The FIFA World Cup will take place from June 12 to July 13 in Brazil.