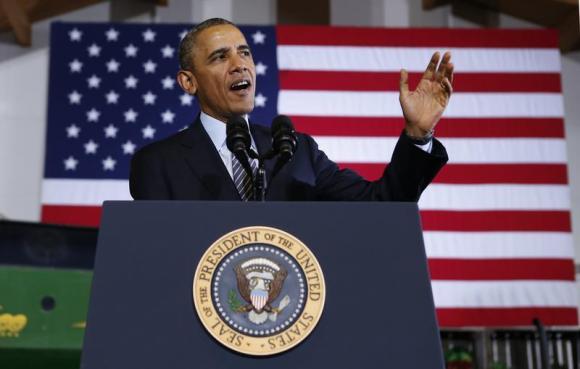 (Reuters) – President Barack Obama issued a sharp warning on Tuesday to companies eyeing business deals with Iran, saying the United States would come down like a “ton of bricks” on those that violated sanctions against Tehran.

Obama, speaking at a joint news conference with French President Francois Hollande, said France and other allies were committed to enforcing existing sanctions even as they worked together on a possible a diplomatic deal over Iran’s nuclear program.

Iran and six world powers struck an interim deal in November under which Tehran agreed to limit parts of its nuclear work in return for the easing of some sanctions.

The White House and Western governments are eager to show that, despite diplomatic talks for a longer-term agreement, pressure on Iran remains high.

Last week the Obama administration targeted a host of businesses across Europe and the Middle East for evading sanctions against Iran, the second time Washington has done so since the November agreement.

Obama cited those actions in his warning to companies around the world.

“Businesses may be exploring, ‘are there some possibilities to get in sooner rather than later if and when there is an actual agreement to be had?'” Obama said.

“They do so at their own peril right now, because we will come down on them like a ton of bricks with respect to the sanctions that we control.”

Hollande appeared somewhat on the defensive about the issue. Last week Iran welcomed a delegation of more than 100 French executives, telling them the far-sighted among the group would gain in the race for businesses following an easing of economic sanctions.

The French president stressed that he warned the businesses that sanctions were still in place. The companies made their travel decisions unilaterally, he said.

“Companies just make those decisions when it comes to traveling. But I certainly let them know that sanctions were in force and would remain in force,” he said.

“If contacts were to be made with a view to a new situation in Iran, a situation where Iran would have renounced the nuclear weapon, fully and comprehensively, well unless such a new situation would prevail, no commercial agreement could be signed.”

Congressional Republicans, who want to pass tough new sanctions legislation despite White House assertions that such a move would threaten the talks with Iran, said they were concerned that the international sanctions regime against Iran was falling apart.

Senator Lindsey Graham, a South Carolina Republican, noted that Iranian President Hassan Rouhani tweeted that 117 delegations had visited his country seeking to do businessin the future.

“I believe that the smart money is that the sanctions are pretty much over, and everybody’s trying to get in line to do business with Iran, and that we’re losing our leverage,” Graham said at a Senate hearing on Tuesday.

Hollande is in Washington for an official state visit, and the two presidents emphasized a joint front on major foreign policy hot spots in addition to Iran.

Obama criticized Russia for objecting to a United Nations resolution on aid to Syria. Russian Foreign Minister Sergei Lavrov said on Tuesday a draft U.N. resolution was “detached from reality” and urged the West to refrain from what it called one-sided accusations against Damascus.

“Secretary (of State John) Kerry and others have delivered a very direct message to the Russians that they cannot say they are concerned about the well-being of the Syrian people when there are starving civilians,” Obama said.

Obama said the United States was exploring all options with regard to the situation in Syria.

“Right now we don’t think that there is a military solution per se to the problem but the situation is fluid and we are continuing to explore every possible avenue to solve this problem,” Obama said.

The three-year-old war has killed more than 130,000 Syrians and driven a third of the population from their homes.