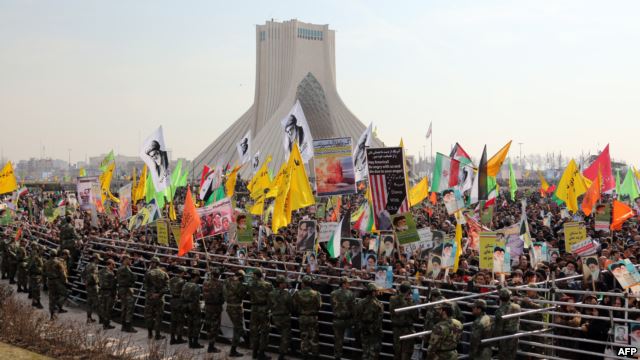 Hundreds of thousands of Iranians have gathered in Tehran to mark the 35th anniversary of the Islamic Revolution that toppled the pro-U.S. shah and brought Islamists to power.

Many in the crowd in Tehran’s Azadi Square chanted, “Down with the U.S.” and, “Death to Israel,” ahead of a speech by President Hassan Rohani.

In his address, Rohani vowed Iran would continue with what he called peaceful nuclear development and warned outside powers against military action over the Islamic republic’s nuclear program.

“Any threat made against the Iranian nation is unworthy and childish,” Rohani said.

Despite Iran’s recent diplomatic outreach to the West, both the United States and its ally Israel have refused to rule out possible military action over the nuclear issue.

Rohani, a relative moderate in comparison to his more hard-line predecessor Mahmud Ahmadinejead, made a point of reaching out to the West after he took office in August after a landslide election victory.

Under the deal, Tehran has agreed to curb uranium enrichment and other nuclear activities in return for the partial easing of international sanctions.

Years of such sanctions have restricted Iranian crude exports and dealt a crippling blow to the economy. Analysts say easing such measures was a key driver of Rohani’s initiative.

Rohani addressed the sanctions issue in his anniversary speech, denouncing them as “cruel” for their effect on ordinary Iranians.

Rohani also called the nuclear negotiations a “historic test” and pledged Iran would be a reliable partner if the West demonstrates respect and cooperation.

Talks between Iran and the world powers are due to resume next week on a longer-term pact aimed at resolving the decade-long standoff over allegations Iran has been trying to develop an atomic weapon.

Iran denies any military element to its nuclear program, instead saying it needs atomic power for energy production and other civilian uses.

In his speech, Rohani also reached out to Iranian young people and pledged that his government was taking action to reduce Iran’s massive inflation.

The United States and Iran have not had diplomatic relations since 1980, after Washington severed ties in the wake of the 1979 revolution. During that upheaval, the American Embassy in Tehran was seized and U.S.-backed Shah Mohammad Reza Pahlavi was toppled.

However, high-level diplomats from the two countries have met repeatedly in recent months as Iran and the world powers pursued a breakthrough on the nuclear issue.