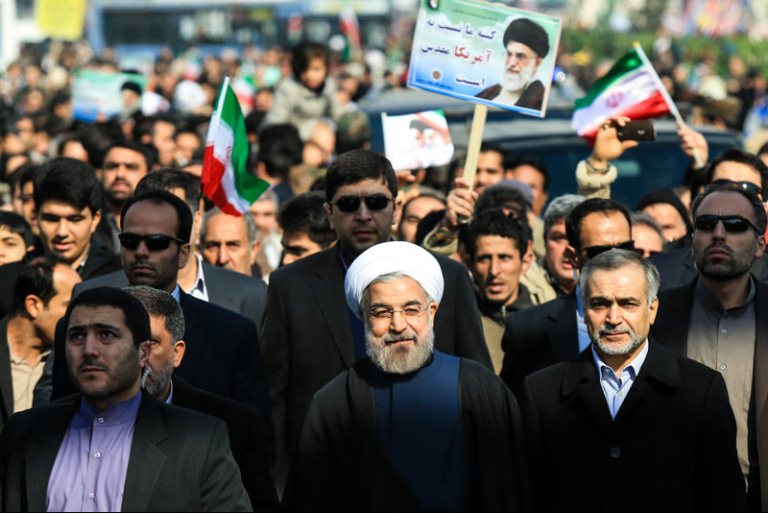 It is a measure of Iran’s economic situation that President Rouhani, in his Tuesday speech on the 35th anniversary of the Islamic Revolution, set a goal of growth near zero.

The administration has taken a serious step in the field of confronting stagnation and will return growth to the economy.

The first steps to reduce last year’s negative 5.8% growth close to zero will be taken at the beginning of this year (March 2014). Projections indicate that it is possible to reach negative 0.7% which is a source of great pride for the administration.

Rouhani implicitly acknowledged the effect of international sanctions as well as mismanagement on Iran’s economy, linking the issue to Tehran’s talks with the 5+1 Powers over its nuclear program:

During negotiations, we wanted to illustrate that sanctions have been incorrect. I announce with a loud voice on behalf of the Iranian nation that threats against the Iranian nation are worthless and childish because our nation has persevered against various threats during the past thirty-five years and has reached victory.

Activist Faezeh Hashemi, the daughter of former President Hashemi Rafsanjani, has been named Presidentof the Association for Press Freedom.

Hashemi was imprisoned for six months last year for criticism of regime officials.

The Supreme Leader’s military leader, Yahya Rahim Safavi, used the anniversary of the Islamic Revolution to issue a warning:

The Iranian nation and Armed Forces are ready for an all-out defense and protection of the country with all their power and they will respond to any aggression with reciprocal and inconceivable strikes….

The start of war against Iran means the destruction of the Zionist regime by Hezbollah forces of Iran and the Lebanese Hezbollah.

Iran Prosecutor General: House Arrest For Mousavi and Karroubi Until They Repent

Iran Prosecutor General Gholam Hossein Mohseni Ejei has said that opposition leaders Mir Hossein Mousavi and Mehdi Karroubi will not be released from house arrest unless they repent.

Mousavi and Karroubi — both candidates in the disputed 2009 Presidential election — and Mousavi’s wife, activist and academic Zahra Rahnavard, have been detained since February 2011.

The leaders of the sedition threw the country into serious turmoil; people’s property was destroyed, some were killed and public property was vandalized….

Unless the leaders of sedition seek absolution for these criminal measures, nothing will occur. Individuals who strive to lift house arrest will not reach any results.”