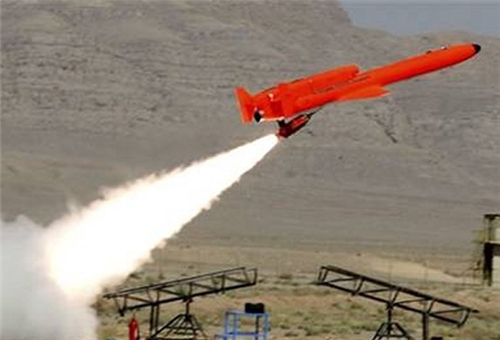 The Kosar missiles are equipped with remote-control and search and positioning systems used in electronic wars, which increase its capability to defend the country’s coasts and islands in the Persian Gulf and the Strait of Hormuz.

The missile can hit the target in three modes of land-to-sea, sea-to-sea and air-to-sea and can target small and mid-size warships with a high precision capability.

The Iran-made drone, Karrar, is an advanced home-made combat UAV which is capable of carrying a military payload to carry out bombing missions against ground targets.

It is also capable of flying long distances at a very high speed.

“Karrar has a maximum flying range of 1000km in distance,” former Iranian Defense Minister Brigadier General Ahmad Vahidi said in 2010 on the sidelines of a ceremony to unveil Karrar, and added, “In addition to Karrar, Iran possesses other UAVs with a flying range of 1,000 km.”

“The jet drone enjoys abundant capabilities, including its far range and operational depth,” he said, adding that Iranian experts have increased the flying altitude of the UAV.

Iran’s possession of such advanced missiles and drones make the US and its allies to think twice about military action against Tehran.

Iran has warned that in case of an attack by either the US or Israel, it will target 32 American bases in the Middle-East and close the strategic Strait of Hormuz.