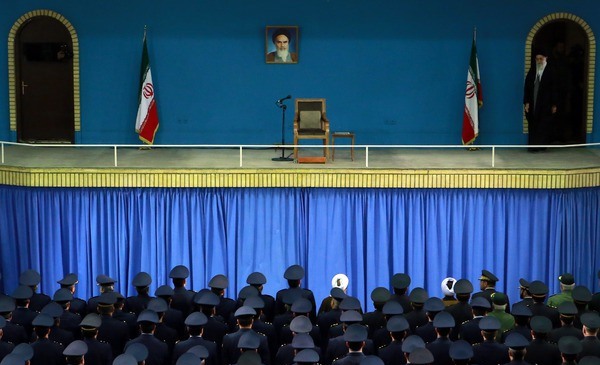 Leader of the Islamic Revolution Ayatollah Seyyed Ali Khamenei says American officials are lying when they say they are not pursuing regime change in Iran.

“American officials, in negotiations with the country’s (Iran) officials, say we are not after regime change in Iran but they are lying because if they had the ability to do this they would not hesitate one second,” Ayatollah Khamenei said in an address to Iranian Air Force commanders on Saturday in Tehran.

“The other reason behind US inability to change the Islamic establishment [of Iran] is that the establishment relies on the nation’s faith, kindness and resolve,” the Leader pointed out.

“One can change the tactics, but principles must remain rock solid,” Ayatollah Khamenei said.

The Leader emphasized that compromise with arrogant powers will lead to nowhere and stated that interventionist powers seek to put autocratic puppets at the helm.

The secret to the longevity of the Islamic Revolution is its reliance on Islamic values, Ayatollah Khamenei underscored.

The Leader stressed that seeking independence should not be translated into hostility with the rest of the world. Independence means resistance against the interventionist powers which do not respect the dignity of other nations for their personal interests.

The Leader said the imperial order has been manifested in absolute terms in the current US administration.

The United States threatens Iran and ridiculously expects it to reduce its defensive power, Ayatollah Khamenei said, adding the solution to economic problems does not lie in lifting sanctions.