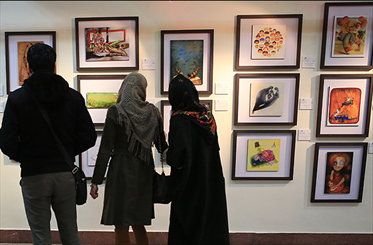 TEHRAN, Feb. 5 (MNA) – The Iranian deputy culture minister for artistic affairs has said that Iranian artworks are impressive for the European countries.

Speaking during the opening ceremony of the 6th Fajr International Festival of Visual Arts in Tehran on Monday, Ali Moradkhani said that many European countries have asked to host exhibitions by Iranian artists.

“We need to have active participation in all art events in the world,” he said and added, “The West pursues Eastern art in China or India while the civilization presented by Iran to the world is almost unparalleled.”

“Due to Iran’s strong cultural diplomacy, now we enjoy a favorable and appropriate opportunity to participate in international arena,” he stated.

Over 900 works by 800 Iranian artists in painting, calligraphy, graphic design, cartoon, sculpture and several other art forms have been showcased at the festival, which is currently underway at the Iranian Academy of Arts in Tehran.

Lisa Anderson from Denmark and Roger Mello from Brazil have been selected for the illustration section of the festival.

Felipe Taborda from Brazil and Javier Bermúdez Mexico are members of the poster section jury, and Muhittin Koroglu from Turkey and Agim Sulaj from Italy are on the jury for the cartoon section.

In addition, Jean Gaumy from France has been selected for the photography section of the festival, which will be held in Tehran from February 3 to 24.