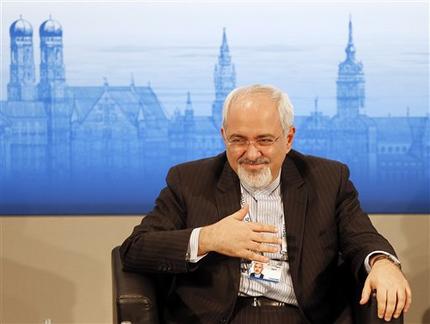 MUNICH (AP) — Iran’s foreign minister said Sunday his country is prepared to move ahead in negotiations over its nuclear program, assuring Western diplomats that Tehran has the political will and good faith to reach a “balanced” long-term agreement.

Mohamad Javad Zarif told a gathering of the world’s top diplomats and security officials that his country and Western nations were at a “historical crossroads” and just beginning to build the trust necessary for a long-term agreement.

“I think the opportunity is there, and I think we need to seize it,” he said.

The comments came after Zarif met one-on-one with U.S. Secretary of State John Kerry on the sidelines of the conference Sunday morning.

Kerry reiterated to Zarif the importance of both sides negotiating in good faith, and of Iran abiding by its commitments, according to the State Department. Zarif described it as a “good meeting.”

Iran and the International Atomic Energy Agency struck a deal Nov. 11 granting U.N. inspectors wider access to Iran’s nuclear facilities. The deal is parallel to an agreement reached with world powers Nov. 24 in Geneva to have Iran halt its most sensitive uranium enrichment activities in return for an easing of Western sanctions over its nuclear program.

“That’s an important beginning, it’s not the end of the road,” Zarif said of the two deals. “There are important questions and we are prepared to address them.”

IAEA director general Yukiya Amano said he could report that “practical measures are being implemented as planned” by Iran, and that there would be new negotiations over the next phase on Feb. 8.

The agreement with world powers, implemented Jan. 20, will be in effect for six months while further negotiations are held aimed at reaching a permanent agreement eliminating concerns that Tehran might use its nuclear program to build nuclear weapons.

Tehran denies such aims but says it is ready to reach a deal in exchange for full sanctions relief.

Iran has agreed to a new round of negotiations on Feb. 18 in Vienna with the six-nation group of world powers, the five permanent members of the U.N. Security Council plus Germany.

“What I can promise is that we will go to those negotiations with the political will and good faith to reach an agreement, because it would be foolish for us to only bargain for six months – that would be (a) disaster for everybody,” Zarif said.

Zarif said Iran and the international community needed to restore mutual trust, and said Tehran’s end goal was “a good solution – a balanced solution.” He added that “an unbalanced solution is inherently not stable.”

“Believe me, you do not possess the monopoly on mistrust – there is a lot of mistrust in Iran,” he told the audience. “Iranians believe, with good reason, that the West wants to deprive Iran of its ability to have access to technology.”

Zarif said that “the answer at the end of the day is you need to put aside all narratives and take concrete steps.”

In return, the U.S. and the EU simultaneously announced the lifting of sanctions on petrochemical products, insurance, gold and other precious metals, passenger plane parts and services. They also plan to release $4.2 billion in Iranian assets of oil revenues blocked overseas, in eight installments over six months.

The defense minister of Israel, Iran’s regional archenemy, made clear that his country’s mistrust is undiminished.

“We should watch very carefully how this regime is going to manipulate, to deceive,” said Moshe Yaalon, addressing the conference after Zarif.

“It’s very important for them to improve their economy, but they will exploit this time available in the coming years to make progress at least as a military nuclear threshold state.”