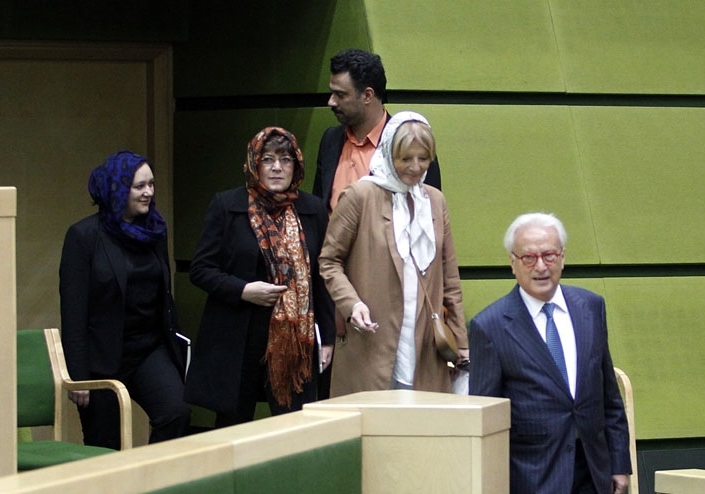 TEHRAN: Six months after the inauguration of Iran’s moderate President Hassan Rouhani, Western diplomats and businessmen are racing to Tehran hoping that a diplomatic thaw will reopen lucrative markets.

A landmark agreement reached with world powers on Iran’s controversial nuclear programme in November has raised hopes that Western sanctions could be lifted on the oil-rich country with a population of 76 million.

A delegation of 110 members of MEDEF– France’s largest employers’ union– is due in Tehran on Monday to resume talks after an absence of several years.

No contracts will be signed due to the strict international sanctions still in place, but the visit is seen as a key step towards regaining a foothold in the country.

Iran’s auto market was once dominated by French giants including Peugeot, which halted operations in 2012, and Renault, which sharply scaled back its presence due to US sanctions on spare parts deliveries in June 2013.

The French firms hope to regain their share against Asian rivals, particularly Chinese firms, which are not bound by the Western sanctions.

Iran clinched the interim deal in November with the P5+1 group — Britain, China, France, Russia, the United States and Germany — under which it agreed to curb its nuclear activities in exchange for sanctions relief.

The six-month agreement, which took effect January 20, is aimed at buying time for a comprehensive agreement.

Western nations have long accused Iran of pursuing a nuclear weapons capability alongside its civilian programme, charges denied by Tehran.

The breakthrough in the talks has been largely attributed to the election last year of Rouhani, a reputed moderate who had vowed to pursue a diplomatic solution to the nuclear impasse.

“Among the regional countries and compared to Syria, Iraq, Egypt and Libya, Iran is paradoxically known to enjoy a remarkable stability,” an Iranian analyst, speaking on condition of anonymity, told AFP.

Iran has also seen recent high-profile political visits, including by Turkish Prime Minister Recep Tayyip Erdogan, who led a delegation last week aimed at boosting economic ties between the two countries, which back opposite sides in Syria’s civil war.

And Swedish Foreign Minister Carl Bildt is due to arrive in Tehran on Monday, while his Polish counterpart Radoslaw Sikorski is expected in late February.

The recent visits of former British foreign minister Jack Straw and ex-UN chief Kofi Annan could be also added to the list.

Iran’s diplomatic ties with Western countries were severely strained under Rouhani’s predecessor Mahmoud Ahmadinejad, known for his hard line on the nuclear programme and incendiary rhetoric towards Israel.

“These visits are a sign that the taboo of sanctions has been shattered,” Amir Mohebian, a political analyst, told AFP.

“This is already a major success for the diplomacy of President Rouhani.”

There is no sign of any diplomats from the United States — still dubbed the “Great Satan” by Iran’s hardliners — making their way to Tehran.

But US Secretary of State John Kerry has met repeatedly with his Iranian counterpart Mohammad Javad Zarif, and on Sunday the two met on the sidelines of a Munich security conference to discuss the next round of nuclear talks.

Iran is set to resume negotiations with the P5+1 in Vienna on February 18.