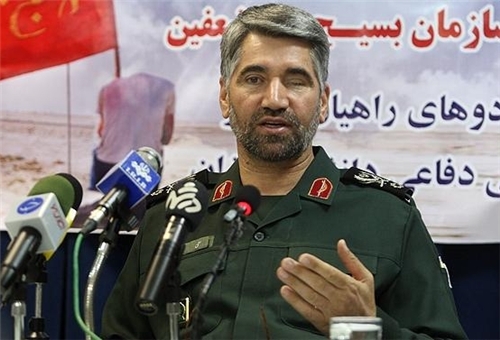 TEHRAN (FNA)- Lieutenant Commander of Basij (volunteer) Forces Brigadier General Ali Fazli reiterated Iran’s full preparedness to confront any possible enemy threat and aggression, and said that the country’s military forces will give a swift and decisive response to any enemy threat.

“If the enemies of the holy Islamic Republic of Iran’s ruling system (government) claim that the military option is on their table, I should say that the option of Islam and defending the revolution is on our table as well,” Fazli told FNA on Sunday.

He stressed that if the enemies claim that they are monitoring Iran anytime and anywhere, they should know that the Iranian nation is aware of all their plots and has devised proper responses to them.

Meantime, Fazli downplayed the US officials’ military threats against Iran, and said they don’t have the necessary capability and power to launch an attack.

His remarks came in reaction to the recent statements of US Secretary of State John Kerry, who said in an interview in Geneva late last month that the military option was still on the table “if Iran did not live up to its nuclear commitments under the Geneva deal”.

Also in January, Deputy Chief of Staff of the Iranian Armed Forces for Cultural Affairs and Defense Publicity Brigadier General Massoud Jazzayeri downplayed the US and its allies’ war rhetoric against Iran, and said they don’t dare to attack Iran because they have no hope of victory in such a war.

In response to Kerry’s comments, the senior Iranian commander said that the US government knows that the military option against Iran is not practical.

Iran has warned that in case of an attack by either the US or Israel, it will target 32 American bases in the Middle-East and close the strategic Strait of Hormuz.

On November 24, Iran and the Group 5+1 (the five permanent UN Security Council members plus Germany) sealed a six-month Joint Plan of Action to lay the groundwork for the full resolution of the West’s decade-old dispute with Iran over its nuclear energy program. In exchange for Tehran’s confidence-building bid to limit certain aspects of its nuclear activities, the Group 5+1 agreed to lift some of the existing sanctions against Tehran and continue talks with the country to settle all problems between the two sides.

The US Treasury Department in mid December added names of 19 persons and Iranian and foreign companies to the sanction list.

This is while in exchange for Iran’s confidence-building measures, the US agreed to refrain from slapping new sanctions on Iran.

At the time, the Iranian negotiators in Vienna halted nuclear talks with major world powers to return to Tehran for consultations after Washington blacklisted a dozen companies and individuals for evading US sanctions.

The experts meetings continued after US Secretary of State, John Kerry, contacted his Iranian counterpart and tried to appease Tehran.