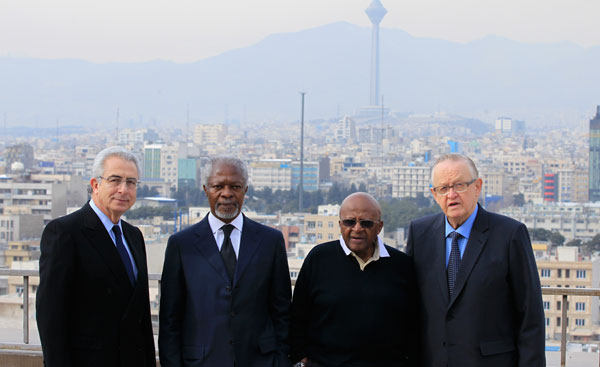 Elders say Iran should be part of Syria solution

LONDON: A delegation of former world leaders from The Elders group called Thursday for Iran to be included in resolving the Syria conflict, following a three-day trip to Tehran.

Led by former United Nations secretary-general Kofi Annan, the four-strong group also called for a final push on reaching an agreement on Iran’s nuclear programme, for the sake of regional stability.

“We are very encouraged by the frankness of our conversations with our hosts,” said Elders chair Annan.

“We are convinced that Iran can be a key factor for stability and opportunity in the region, thanks to its historical role and capacity to influence others.

“We believe Iran should be part of the solution to the Syrian crisis.”

Iran is a staunch supporter of Syrian President Bashar al-Assad’s regime, which has been battling rebels for nearly three years in a bloody civil war.

Tehran has however denied accusations that it has sent Hezbollah militants to fight in Syria in support of Assad.

Iran was excluded from peace talks being held in Switzerland over its refusal to back calls for a transitional government.

The Elders, whose main office is in London, was formed in 2007 and is made up of 12 former global leaders who “promote peace, justice and human rights,” according to its website.

Iran has sought to improve relations with Western countries since the election last year of Rouhani, a reputed moderate, and clinched a landmark nuclear accord with world powers in November.

“This is an exciting development,” Ahtisaari said.

“Efforts must be sustained so that a final agreement can be signed by all parties. If the world fails in this, it will not only be the Iranian people who suffer, the stability of the region will suffer as well.”

” Iran is at a crossroads. It has well educated and cultured citizens, including many young people, who are ready to seize enormous opportunities and take advantage of the global economy,” he said.

“The world needs to engage with Iran and help realise its potential. Because then, everyone will benefit.”