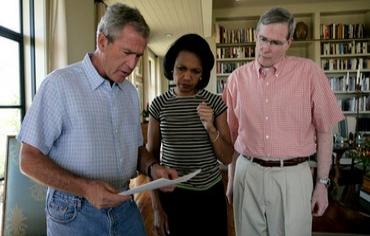 The US has mishandled the post-Arab awakening crisis in both Syria and Egypt, former US national security adviser Stephen Hadley said Tuesday.

Hadley, who served in the White House under former president George W. Bush, spoke in Tel Aviv at the Institute for National Security Studies annual international conference. He listed four struggles that have emerged since the Arab Spring in 2011: moderate Muslims versus Islamic extremists; secularists vs. theocrats; Sunnis vs. Shi’ites; and democrats vs. authoritative governments.

“How are we doing?” he asked about each one, beginning with the moderate Muslim vs. Islamist extremist struggle.

“Not well,” he replied, “and the reason I think is largely our ineffective response to the crisis in Syria.

There is now, Hadley said, the prospect of an al-Qaida safe haven both in Iraq and Syria, something that would threaten Israel and the US regardless of whether or not Assad “goes or stays.”

The strategy that needs to be adopted, he said, is to “support the moderates and fight the extremists.”

He said this type of fight could not be done by drones, but rather would entail “fighters on the ground willing to engage al-Qaida.” That, he said, is why the US is increasing its military and intelligence support to Iraq, and also reportedly increasing its support for moderate Syrian opposition elements willing to fight al-Qaida.

Regarding the situation in Egypt, the former national security adviser said that, while the situation there is admittedly “extremely difficult,” he believes the US “got lost in dealing with Egypt,” and in “some sense got forced into a position where it looked like we were picking winners.

“We were for Mubarak, until we were against Mubarak,” he said. “And then it seems to me we were for the Muslim Brotherhood, until they were overthrown. And now there is some pressure on us to side with the military.”

That course of action unwittingly “alienated just about everyone on the Egyptian political scene,” he said.

A better policy would have been to have said when the protests broke out in Tahrir Square in 2011 that the US was behind those seeking freedom and the establishment of a tolerant and inclusive society based on the rule of law.

The US, he said, should have made clear it was with the Egyptian people on those issues, and that if they elected a government – even a Muslim Brotherhood government that pursued that course – they would have US support, but when they diverted from that path, that support would be lost.

“I think that if we had done that from the beginning, it would have been a more resilient policy, it would have helped the Egyptian people, and would have avoided a situation where we are marginalized and have little influence,” he said.

Asked, on a different topic, what advice he now has for Prime Minister Binyamin Netanyahu, Hadley treaded diplomatically and said only, “Do things because you think they serve the interests and values of your country, and if you use that as your touchstone, you will serve your country well.”