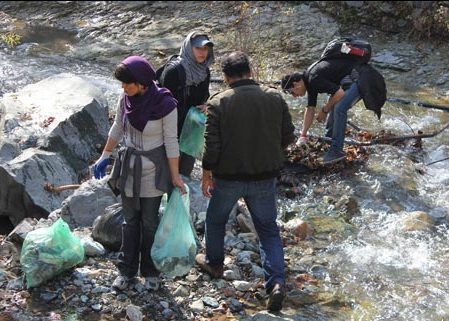 Challenges to and from environment in Iran

Tehran, Jan 28, IRNA – On January 18th the United Nations Resident Coordinator in the Islamic Republic of Iran, Gary Lewis delivered the keynote speech at the Royal Geographical Society at a Symposium entitled “Challenges to and from the Environment in Iran.”

The event brought together international NGOs, conservation practitioners and interfamily-renowned scholars from Iran and other countries to highlight the challenges that face Iran and the preservation of its unique habitats, wildlife and once abundant agricultural land.

In his opening remarks Lewis focused on the importance of the “human security” concept. “The concept of ‘human security’ speaks to the hugely destabilizing impact of the grinding, relentless poverty of the so-called “Bottom Billion” – hunger – famine – food insecurity – deadly infectious diseases – poor sanitation – natural disasters – and the impact of climate change, in terms of water shortages and expanding desertification” he said.

Then he shifted his focus to describe the five main environmental threats that Iran is facing:

Lewis had recently visited the Hamouns and Lake Uromiyeh among other places. He shared with the audience his personal reflections about these visits. He said “I recently visited Lake Uromiyeh, once the world’s largest saltwater lake. I was utterly devastated by what I saw. It was visually apocalyptic. And it is man-made.” He added: “Agriculture of Uromiyeh is under threat. When agriculture is under threat, livelihoods come under threat. When people cannot sustain themselves economically they move. And they move to places where other people live. This causes tension. It causes disputes. It sometimes results in violence.”

The UN Resident Coordinator emphasized that water is the biggest resource constraint in Iran as well as the greatest long-term risk.

Then he spoke of the second threat – land degradation – which comes from two sources: desertification and deforestation. “We need to re-afforest more. We need to expand integrated natural resource management – and plan for ecological sustainability. We need stricter policies and laws to protect land and water resources – and we need to better enforce those policies and laws that are already in place” Lewis said.

With regards to the third challenge – energy – he said there is a need for Iran to reduce its greenhouse gas emissions. “Currently, Iran’s energy intensity and per capita CO2 emission levels are among the highest in the world. This has to do with Iran’s growing population – its rightful development aspirations – and its abundant natural gas and oil reserves. But it also has to do with fuel price subsidies that have set the price of energy far too low.” He suggested that Iran should improve energy efficiency in different sectors while increasing its share of solar, wind and geothermal in its energy mix.

Urban air pollution is another environmental threat which Iran is facing. According to statistics Iran cities are among the most polluted in the world. “Of all of Iran’s environmental issues, the effect of air pollution on the quality of life is probably the most immediate – and tangible – and visible – threat […] solutions to these air pollution problems must include four things: (1) energy pricing; (2) dealing with vehicle exhaust emissions; (3) policy enforcement and (4) regional cooperation on micro-dust storms” Lewis said.

With regards to the fifth threat – biodiversity loss – he believes “We need to involve local communities in their protection – and integrate conservation into daily life. We need to promote alternative livelihoods for rural communities – like ecotourism – to reduce unsustainable over-reliance on natural resource harvesting.”

During his presentation Lewis mentioned that the UN is doing a lot of work with the Department of Environment as well as the Ministry of Energy and the Department of Agriculture to overcome Iran’s environmental challenges. “We have a long road ahead. But I believe that we are now – quite literally – operating in a positive environment” he said.

Lewis said he recognized how much the new government was aware of these challenges and is taking steps to counter then: “This is the point where I need to pause and say – quite sincerely – how pleased I am to be reading and hearing a number of outspoken statements – coming from the new Government of Iran – on the need to protect the environment.”