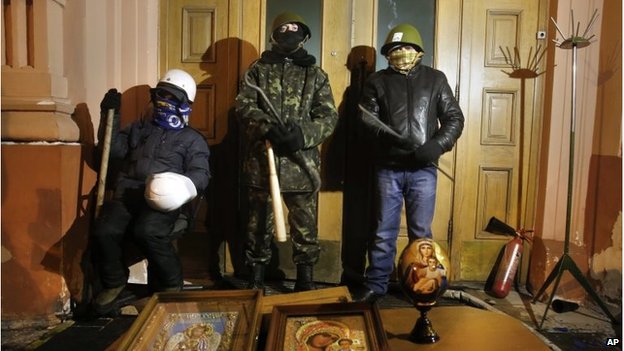 Protesters in the Justice Ministry, Kiev, Ukraine (27 Jan 2014)
The protesters said they took over the building without resistance

Ukraine’s justice minister has warned anti-government protesters occupying her ministry she will call for a state of emergency if they do not leave.

Olena Lukash told local media she would ask the National Security and Defence Council to introduce the measures.

Protesters seized the building in Kiev late on Sunday and set up barricades outside with bags of snow.

Unrest is spreading across Ukraine, with activists taking over municipal buildings in up to 10 cities.

Buildings have come under attack even in eastern areas which have traditionally had closer ties with Russia and where President Viktor Yanukovych has enjoyed strong support.

Protesters say there weren’t any guards at the justice ministry, they simply smashed their way through the window – now barricaded by furniture – and went in.

They are busy making another barricade out of compressed snow shovelled into bags, and hosing the nearby pavement on the inclined street with water. There is no sight of police of any kind.

The one policeman I found was about to lock the entrance to a nearby Metro station. He sighed, rolled his eyes, and said: “Nothing surprises us anymore.”

When I asked what the activists intended to do with the ministry and how they were going to run it, a masked man said: “We don’t need this justice for sale anymore.”

The crisis has escalated with the deaths of four activists in recent days.

Correspondents say protesters entered the justice ministry building in the capital without resistance.

“The seizure of the Ministry of Justice is a symbolic act of the people of the uprising. Now, these authorities are stripped of justice,” one protester told reporters.

One of the organisers of the ministry occupation, who gave his name as Oleg, said the building was being used to shelter those taking part in street protests nearby.

He told the Associated Press news agency: “We are not going to do any hooliganism, or have anyone hurt. We are peaceful people, we are for justice.”

Ms Lukash told Inter TV channel: “If the protesters do not leave the justice ministry building… I will ask the National Security and Defence Council of Ukraine to impose the state of emergency.” 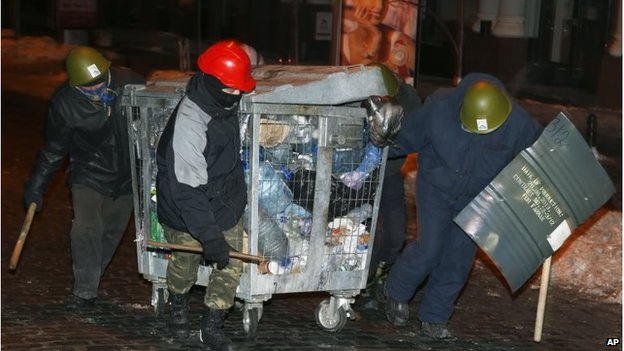 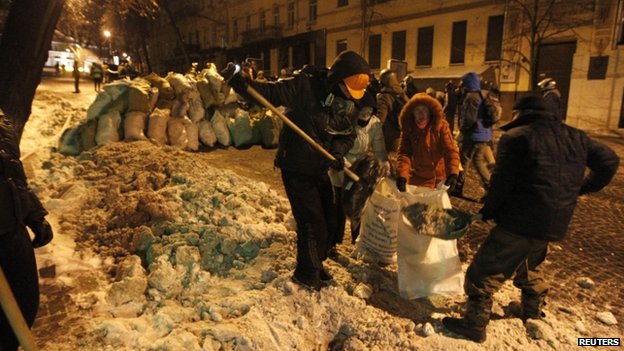 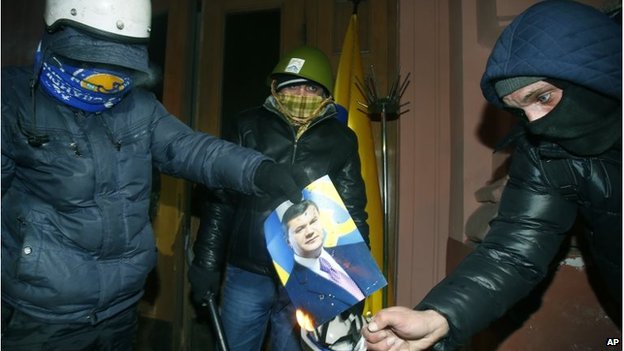 The protesters are demanding immediate elections
Last week, the parliament of the Crimean Autonomous Republic – seen as a staunch supporter of Mr Yanukovych – also urged the president to declare a state of emergency.

He said key demands must be met, including new elections. A vote is not due until 2015.

The opposition is demanding that a free trade agreement with the European Union be signed and political prisoners be freed, including former Prime Minister Yulia Tymoshenko.

They are also demanding the repeal of recently introduced laws restricting public protest.

Although the protest movement – the EuroMaidan – is largely peaceful, a hardcore of radicals have been fighting battles with police away from the main protest camp in Maidan, or Independence Square.

Reports now suggest unrest is spreading further into the country’s east, which is seen as Mr Yanukovych’s support base: