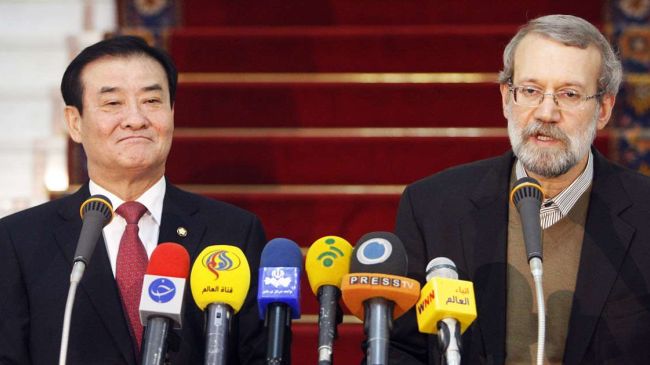 Seoul calls for new phase in ties with Tehran

South Korea has called for the opening of a new chapter in Tehran-Soul relations.

“Iran-South Korea ties have a 50-year-old history, but we want to start a new phase in relations between the two countries,” said South Korean National Assembly Speaker Kang Chang-hee following a meeting with his Iranian counterpart Ali Larijani on Sunday in Tehran.

“Iran is a very important country in the Middle East and South Korea is willing to cooperate with Iran. Our technical expertise together with Iran’s rich resources -like oil and gas plus the mines- can lead to desirable economic activities which will benefit both countries,” he added.

“This is my first visit to Iran as the [South Korean] National Assembly speaker, and I want to see what I have formerly heard about the Iranian history and culture,” said the top South Korean official.

During their meeting, Iran’s Majlis Speaker Ali Larijani also stressed the expansion of commercial ties between Iran and South Korea with regard to the two countries’ common economic and cultural interests.

“For some 50 years, South Korea has had close economic and cultural ties with Iran. During the past years, Iran and South Korea have had considerable commercial relations. Of course in the last two years, there have been some fluctuations. But the South Korean Parliament is determined to make the best use of its parliamentary diplomacy capacity to improve and expand bilateral ties with Iran,” Larijani stated.

A high-ranking parliamentary delegation headed by the South Korean National Assembly speaker arrived in Tehran on Sunday for a three-day visit.

This is the 5th South Korean parliamentary delegation to visit Iran since March last year.