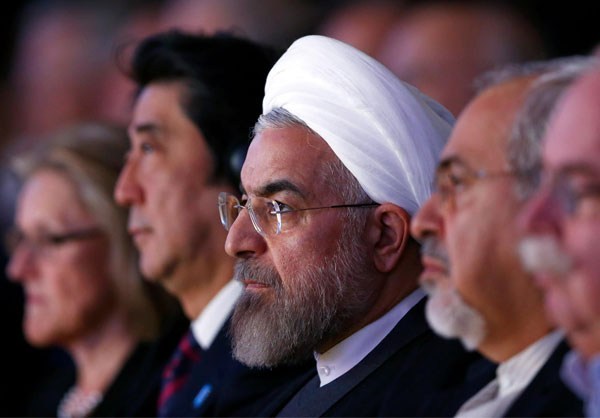 Geneva II talks were not Iran’s number one priority

Iranian President Hassan Rouhani delivered one of his best speeches since he assumed his post last year. His attempt came during the World Economic Forum in Davos on Thursday morning.

Rouhani said he attempted to establish “constructive participation” with his neighbors and pledged that his country has no intentions to possess nuclear weapons.

In Geneva, which is not very far from where he was delivering his speech, another conference was being held – the peace talks’ conference on Syria.

Last Sunday, Iran’s government was proud that it’s recently been present on all international levels. It appeared like it achieved a diplomatic success as U.N. Secretary General Ban Ki-moon invited Iran to attend the peace talks on Syria. However, after Iranian officials denied they agreed to preconditions to attend the conference, Ban withdrew the invitation one day after making it.

Nevertheless, it’s not clear how Ban or Iranian foreign affairs minister Mohammad Javad Zarif misunderstood one another. But the general statement of Iran regarding the preconditions to attend the conference poses the threat of the possibility of undermining the peace talks.

And now in Switzerland, in a place that’s not very far from where the Geneva II conference is being held, we see President Rouhani dazzling the audience by delivering an amazing and non-provocative speech.

And as the international community makes all its efforts so the Syrian opposition sits before Bashar al-Assad’s representatives on one table for the aim of putting an end to the bloodshed that’s been ongoing for around three years, Iran – which is considered a major player and one of the two governments that influence the Assad regime, besides Russia – is absent from the conference.

It’s possible that the U.N. secretary general sent the invitation to Iran out of good intentions , with the aim of encouraging it to help the world solve the problem in Syria before it gets out of control and trespasses the war-torn country’s borders.

Evidence shows that Iran’s priority in the region has changed, as Syria is no longer its only concern.

Iranian politicians currently focus on their positive appearance and on basing their acts on international levels. They also focus on exploiting available commercial opportunities in the phase after lifting the sanctions.

President Rouhani’s major concern is represented in increasing oil production and attracting investors to improve the economy. He also does not desire to know the Iranian militias fighting inside Syria and he doesn’t want to be involved in this issue. In addition to that, Iran’s government has repeatedly denied that it has forces inside Syria. Some are saying that the Iranian government is separating between militias linked to it and militias fighting in Syria without directions from it.

It seems that the calm tone which characterized Rouhani’s speech in Davos was designed to resume efforts aimed at achieving wide international acceptance. In fact, Iran was subject to economic and political suffering for the past eight years, and the Iranian president appeared like the pragmatic president who does not like to get involved in the Syrian crisis at all.

In the meantime, it’s very important for Iran to gain a good reputation among Western powers, even if this requires giving up on Syria and all interests. In this region, the future is for the countries which witness stability and which have a strong economy.

Now Iran has a different aim and another pressing issue: Iranians were more interested in being present at Davos 2014 and in meeting new investors than they were in being present in Geneva or in fighting the Syrian opposition.

The U.S. has clearly said that the West’s agreement with Iran regarding the latter’s nuclear program is not at all linked to Syria. Maybe Iran would dissociate itself from Syria and leave Russia as the major player. In this case, Iran would stay away from Syria’s current situation and chaos.

In addition to that, Rouhani is a moderate politician that enjoys the supreme guide Ayatollah Ali Khamenei’s trust. His moderation means he’s capable of dealing with both the hardliners and the reformers. As long as he follows that balanced policy regarding this path, then this will better serve Iran’s interests.

Rouhani’s speech – in truth and in essence – was “a request to once again join the international community.” Rouhani was saying “I hope you trust me as we desire to cooperate with you!” As for his statements on Syria, his announcement was very simple. He said “Iran sees that we must all attempt to put an end to the bloodshed,” and “No foreign party must seek to specify Syria’s future.” This statement is what the Iranian president was authorized to say about Syria.