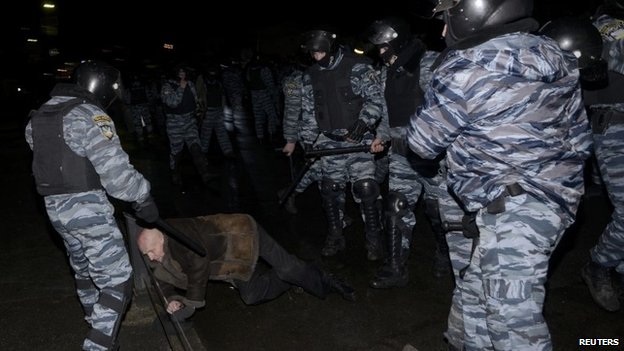 US launches petition for sending peacekeeping troops to Ukraine

On the web site of White House a petition was initiated to support the idea of peacekeeping troops do be moved to Ukraine. Straight after the information about Ukrainian police using preventive and cruel measures, treating people horribly, Americans started the petition in order to try to help and stop the bloodshed in Ukraine.

However, for now it only has 796 votes. It seems that the idea of the US interference into the affairs of another country doesn’t seem very popular among Americans.

Meanwhile, the protests in the Ukrainian capital are still in action. Despite of the negotiations between the government authorities and opposition, it seems that they can’t reach an agreement. And the protestors continue to occupy the Independence Square along with some governmental building.

Ukrainian President Viktor Yanukovych announced that the Ukrainian government will be rearranged at an extraordinary parliamentary session on January, 28.

The Ukrainian government will be rearranged at an extraordinary parliamentary session on January 28, Ukrainian President Viktor Yanukovych said.

“We will make a decision at this session. The president will sign a decree, and we will re-format the government so as to find an optimal version of the government’s professional lineup that would work for Ukrainian society,” Yanukovych said at a meeting with the heads of churches and religious organizations on Friday.

Ukrainian President Viktor Yanukovych vows that he will continue dialogue with the opposition leaders to stop violence in the country.

“I will host an anti-crisis center session now. There has been contact, and we will continue a dialogue with the opposition leaders,” Yanukovych said at a meeting which heads of churches and religious organizations on Friday.

“I will be doing all I can to stop this conflict and stop violence,” Yanukovych said. “If we can do this on a good note, let’s leave it on a good note, and if we can’t, we’ll use all legitimate methods,” he said.