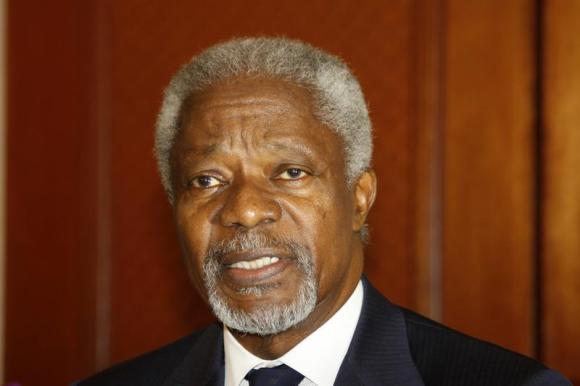 (Reuters) – Former U.N. secretary general Kofi Annan said on Friday that Iran had an essential role to play in guaranteeing stability in the Middle East and urged U.S. lawmakers to give a diplomatic detente with Tehran a chance.

Annan’s successor as U.N. chief, Ban Ki-moon, this week issued and then withdrew an invitation to Iran to join international peace talks on Syria in Switzerland.

Shi’ite Muslim Iran is the main ally of Syrian President Bashar al-Assad in his civil war against a host of mainly Sunni rebel groups, and is locked in a wider battle for influence with Saudi Arabia, its long-standing Sunni Muslim regional rival.

“If we are going to have peace and stability in the Middle East, it is essential that Iran plays its natural role in the region,” Annan, who served as U.N./Arab League envoy to Syria for five months in 2012, told Reuters in an interview at the World Economic Forum in Davos.

Western powers led by the United States co-sponsoring the peace talks insisted that Iran could only sit at the table if it accepted a plan for a transition of power in Syria agreed in 2012, something it has declined to do.

However, since Hassan Rouhani became president last year, Iran has engaged with global powers over its nuclear program, which it says is peaceful but the West fears could be a cover for developing a nuclear weapons capability.

It has agreed to short-term curbs in the program in return for an easing of sanctions, raising hopes of an end to a standoff that has lasted a decade.

“It would lead to a division between Europe and the U.S.. I would urge my friends in Washington to think through this before they push ahead,” he said. “They should give diplomacy, negotiation and peace a chance.”