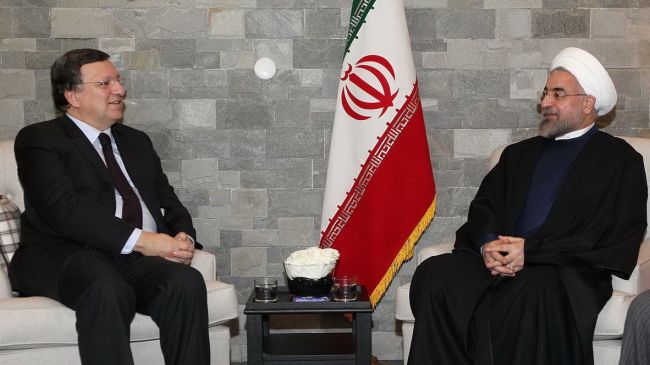 Iranian President Hassan Rouhani has welcomed the development of relations between the Islamic Republic and European countries.

In a Thursday meeting with José Manuel Barroso, the president of the European Commission, in Davos, Switzerland, Rouhani said that there was a suitable ground for the expansion of all-out relations between Iran and European countries.

Rouhani also expressed hope that Iran and six world powers would immediately start comprehensive negotiations over the Islamic Republic’s nuclear energy program, adding that it was “tough” but it could be achieved in the shortest time possible with determination on both sides.

“If the Non-Proliferation Treaty is considered the basis of the work by the negotiators in the nuclear issue, matters could be resolved immediately and in a short time,” Rouhani said.

Iran and the five permanent members of the United Nations Security Council – Russia, China, France, Britain, and the US – plus Germany finalized an agreement on ways to implement the interim nuclear deal the two sides struck in the Swiss city of Geneva on November 24, 2013. The interim accord, which went into effect on January 20,  is aimed at setting the stage for the full resolution of the decade-old standoff over Iran’s nuclear energy program.

Barroso, for his part, said that both the European Commission and the European Union were keen to enhance ties with Iran.

He said that Iran plays a significant role in the Middle East, adding that the Islamic Republic could make a good partner for Europe.

He said that there were suitable grounds for the expansion of full political and economic ties between Iran and Europe.