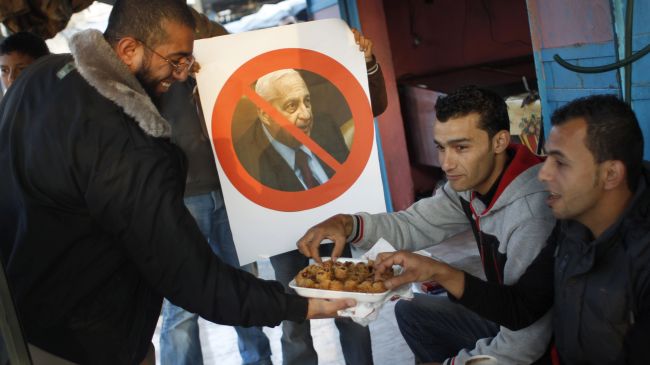 Palestinians celebrated after news broke that former Israeli Premier Ariel Sharon had died after years in a coma on January 11, 2014.

(Reuters) – Israel killed two Gaza gunmen in an air strike on Wednesday, blaming one of them for firing rockets across the border during former Israeli Prime Minister Ariel Sharon’s funeral last week.

Islamic Jihad claimed one man, Ahmed Al-Za’anin, as its own, without immediately commenting on the other’s affiliation.

But Israel’s military, confirming the air strike in Beit Hanoun, said Za’anin was a former Islamic Jihad member who had joined the more secular Popular Front for Liberation of Palestine (PFLP). The PFLP did not immediately respond.

Za’anin had carried out numerous attacks, the military said, including the launch of rockets into southern Israel as Sharon was being buried there last week in a ceremony attended by U.S. Vice President Joe Biden and other foreign dignitaries.

There were no casualties in that salvo.

Za’anin and the second gunman, his relative, were sitting in a parked car when it was hit by the missile, locals said.

On Sunday, an air strike wounded a Gaza man linked by Israel to other rockets launches last week. Israel said those attacks, which hurt no one but caused consternation in towns outside Gaza, were the work of Iranian-backed Islamic Jihad.

Wednesday’s air strike could complicate efforts by Egypt, a frequent mediator between Israel and Gaza, to talk Islamic Jihad, Hamas and other Palestinian factions into a truce.

After a stretch of unusual quiet around Gaza, there have been some 20 Palestinian rocket or mortar launches over the last month, Israel says. On Tuesday, Prime Minister Benjamin Netanyahu vowed preemptive action against such threats.

“We have a very clear policy of foiling terrorist attacks when we identify their forming and of responding firmly to those who harm us,” he said in Jerusalem.

“This policy has yielded a quiet year in 2013, the quietest year in many, and if Hamas and the terrorist organizations have forgotten this lesson then they will learn it, with great force, in the near future.”