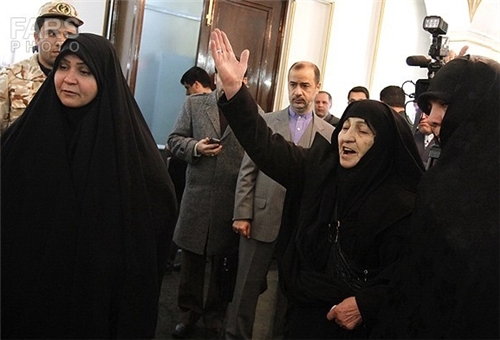 TEHRAN (FNA)- The wife of Iran’s slain commercial attaché in Yemen Abolqassem Assadi blamed the Al Saud regime and Al-Qaeda terrorist group for the Saturday assassination of her husband.

“Saudi Arabia and Al-Qaeda are responsible for the assassination of my husband,” Soheila Assadi said after the body of her slain husband was returned to Tehran on Monday.

She noted that her husband was ambushed by six armed men who were trying to abduct him, but they shot him after he showed resistance and struggled to escape.

On Saturday, Iranian Foreign Ministry Spokeswoman Marziyeh Afkham expressed deep regret over the death of the Iranian diplomat in the Yemeni capital, and strongly condemned the terrorist attack. “Iran is seriously following up the terrorist attack in joint cooperation with relevant Yemeni officials,” Afkham stressed.

Yemeni Foreign Minister Abu Bakr al-Qirbi condoled with his counterpart Mohammad Javad Zarif over the Saturday assassination of Iranian commercial attaché in Sana’a Abolqassem Assadi, and pledged to do his best to identify the hands behind the terror attack.

In a telephone conversation following the attack, Qirbi expressed condolences to Zarif and the bereaved family of the Iranian diplomat.

“Ties with Iran are of great importance to Yemen and necessary measures will be taken to boost security for the Iranian Embassy and diplomats,” said the top Yemeni diplomat.

Zarif, for his part, condemned the assassination and called for those responsible to be brought to justice.