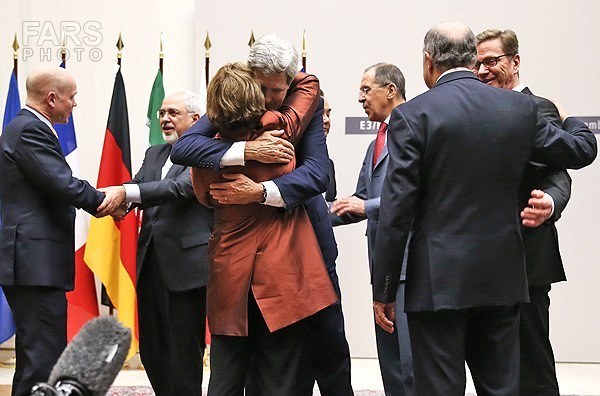 Iran nuclear deal debate: How much does Tehran benefit?

WASHINGTON – The formal start of the landmark deal to restrain Iran’s nuclear program drew clashing statements from Iran and the Obama administration about how much of a boost the temporary accord would give Iran’s battered economy.

Iran’s leaders, eager to sell the temporary accord to their population, said the agreement would open the way to a surge of trade and investment. U.S. officials, facing criticism that the deal is too lenient, insisted that the temporary sanctions relief was chicken feed and that crippling restrictions on Iran’s economy remain.

Following implementation of the deal, “the window of opportunity for Iran’s trade with Europe will increase tenfold,” Abbas Araqchi, Iran’s chief nuclear negotiator, told the semi-official Islamic Republic News Agency. “The private sector of Iran will have a great share of trade with the European Union.”

Ali Akbar Salehi, head of Iran’s nuclear agency, said the deal was a victory on two key points, because it marked the beginning of the end of sanctions while allowing Iran to continue low-level nuclear enrichment.

“The iceberg of sanctions is melting while our centrifuges are also still working,” he said on state television. “This is our greatest achievement.”

But a senior U.S. administration official told reporters “Iran is not open for business.”

“Nobody should misunderstand that point,” added the official, who spoke on condition of anonymity because of diplomatic sensitivities.

The temporary deal, the most important step in a decade in the dispute over Iran’s nuclear program, went into effect as Iran halted production of medium enriched uranium and took other steps to restrain nuclear activities. In return, the West will ease some economic sanctions for at least six months, while Iran and six world powers try to negotiate a more lasting deal to assure that Iran doesn’t acquire the capability to make a nuclear bomb.

Although the deal has been hailed by both sides, a war of words continues about who is getting better terms.

Iranian officials have welcomed the overtures they have been receiving from European and other businesses as a sign of better days to come.

U.S. officials insist that executives and foreign leaders who have been streaming to Tehran won’t be signing any deals until Iran takes the bigger step of agreeing to longer-lasting curbs on its nuclear activities. They say they will be strict in punishing foreign firms that try to evade sanctions.

Iranian President Hassan Rouhani will speak at the World Economic Forum in Davos, Switzerland, on Thursday and is expected to promote Iran’s opportunities for foreign business.

Iranian energy officials have been holding out the lure of big deals to overhaul the country’s aging energy infrastructure and have been hinting that they are willing to structure terms to bring big payoffs to multinational oil companies.

The temporary deal immediately lifted restrictions on Iran’s foreign sales of petrochemicals and allowed resumption of trade in gold and precious metals, and transactions with Iran’s automotive sector.

In a few weeks, Iran will start gradually gaining access to $4.2 billion in funds that have been frozen in overseas bank accounts.

Critics of the temporary deal maintain that the accord has changed the attitude of international business toward Iran, unleashing pent-up demand for Iranian oil and trade in a way that will make it tough to continue isolation of the country.

Yet U.S. officials insisted the opposite. They said the deal’s benefits were a “drop in the bucket” at a time when the Iranian economy is suffering from high inflation and a 60% drop in the oil exports on which the government depends.

They said Iran will end the six month period poorer that when it began because of the continuing bite of sanctions.

“Iran is not and will not be open for business until it reaches a comprehensive agreement,” the senior U.S. official said.

He said that U.S. officials are reaching out to government and financial officials to warn them that the U.S. will continue to enforce sanctions “in a very aggressive manner.”

U.S. officials hailed the beginning of the deal, saying it offered an opportunity to reach a diplomatic solution to the long impasse with Iran over the nuclear program. At the same time, they stressed that the administration approaches the upcoming negotiations with “eyes open.”

The negotiations are to begin in early February, the European Union’s foreign policy chief announced. Wendy Sherman, the head of the U.S. negotiating team, will visit Geneva on Tuesday to begin talks with the five other world powers on how to approach the bargaining, U.S. officials said.