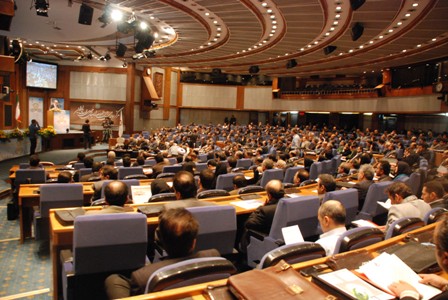 DAVOS, Switzerland (AP) — Talks over the future of Syria and Iran will occur on the sidelines of the annual gathering for political and financial elites in the Swiss ski resort of Davos, the founder of the World Economic Forum said Monday.

Klaus Schwab said in an interview with the Associated Press that there will be crossover between the forum’s 2,500 participants and the officials from the U.S., Russia and close to 40 other countries that are attending the start of the Syria peace conference several hours away in Montreux, Switzerland.

Syria’s main, Western-backed opposition group agreed Monday to attend this week’s peace conference only after threatening to sit it out because of a last-minute U.N. invitation for Iran to join in.

U.N. Secretary-General Ban Ki-moon was forced to withdraw the invitation Monday because the Syrian National Coalition had objected to Iran’s participation because it keeps “troops and militias” in Syria and failed to endorse a 2012 U.N.-brokered roadmap to establish a transitional government.

But Iran will still be able to interact at Davos with many of the key players trying to end Syria’s devastating civil war.

“Here you have some of the true leaders with the influence on the region, so I am sure the results will have an impact on our own discussions,” said Schwab, a German-born economist and engineer who founded the Davos forum in 1971. Since then, the five-day gathering, which attracts heads of state, royalty and top executives, has grown into a massive networking event – what some consider speed-dating for the political and corporate elites.

Iranian leaders’ presence at Davos also coincides with the implementation of the deal agreed to in Geneva that is intended to rein in their nuclear program in exchange for easing sanctions, enabling Iran to pursue new business opportunities particularly in its oil and gas sector.

But Schwab said it would be too early for Iranian President Hassan Rouhani and his foreign minister, Javad Zarif, to start negotiating new investments while at the forum. First, they need to boost international trust that Iran will respect the terms of their nuclear deal.

“We have to create the reality which allows confidence between the different parties, and only in the next phase you can really talk about business,” Schwab said of the Iranians’ prospects for new oil, gas and other business deals.

Discussions on the Israeli-Palestinian conflict are also expected at the Davos forum, with Israel’s Prime Minister Benjamin Netanyahu, President Shimon Peres and Justice Minister Tzipi Livni all attending. The flagging Mideast peace process is a priority for U.S. Secretary of State John Kerry, who is expected in Davos for most of the event, which lasts through Saturday.

Other pressing topics that will likely be touched upon, Schwab said, include climate change, unemployment and the disparity between the rich and poor that could lead to a “lost generation” of youth and social unrest.