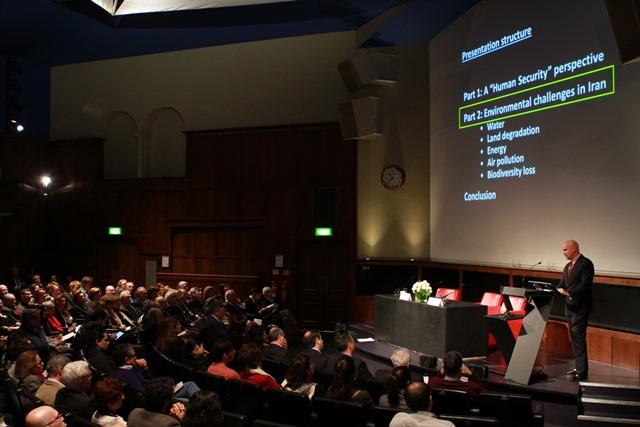 This is a time of immense opportunity for all Iranians to play a positive role and become more involved in finding solutions to environmental challenges in your homeland” said the UN Resident Coordinator and UNDP Resident Representative in the Islamic Republic of Iran, Mr. Gary Lewis.

The UN Resident Coordinator also stressed on the critical situation of two lakes which he recently visited: Lake Hamoun and Lake Uromiyeh.  “The most emblematic example of water concerns is what is happening to Lake Uromiyeh in the northwest of Iran.  I recently visited Lake Uromiyeh, once the world’s largest lake […] I was utterly devastated by what I saw.  It was visually apocalyptic.  And it is man-made” Mr. Lewis said.

During his presentation, he also pointed to other human security threats in the form of desertification, deforestation, air-pollution and the loss of biodiversity – as well as a large carbon footprint – as challenges to overcome.

Before concluding his presentation Mr. Lewis said “This is the point where I need to pause and say – quite sincerely – how pleased I am to be reading and hearing a number of outspoken statements – coming from the new Government of Iran – on the need to protect the environment.”

Among other speakers was the Head of Iran Heritage Foundation, Mr. John Curtis who said “I hope this pioneering and innovative conference can indeed be a catalyst to spark measurable change in protection of Iran’s environment.”

Also speaking at the event was Dr. Kaveh Madani, lecturer in the Center for Environmental Policy, Imperial College of London who stressed on the importance of sustainable management of water resources given the extremely high reliance of Iran on agricultural production.

Ms. Laleh Daraie, Global Environment Facility Small Grants Programme (GEF/SGP) National Coordinator made a presentation on UNDP’s community based projects in Qeshm Island in Iran.  She noted the importance of supporting and involving the local communities in making decisions, rather than making decions on their behalf for them

Dr. Vahid Hosseini from Sharif University of Technology emphasized on the importance of focusing on man-made particles in controlling air pollution.  In this regards he said “Man-made, combustion generated particles go deep into human lungs and affect health much more than dust and other particles that the human body has evolved to resist.”

The two-day seminar entitled “Iran’s Natural Heritage: A Catalyst Symposium to Spark Measurable Change” gathered together international NGOs, conservation practitioners and internationally renowned scholars from Iran and other countries to highlight the challenges that face Iran and the preservation of its unique habitats, wildlife and once abundant agriculture land.