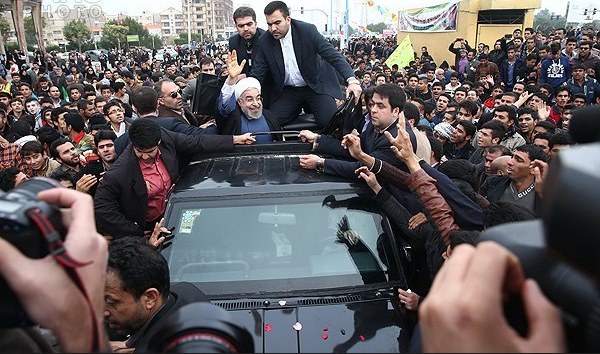 In a speech here in Khuzestan province’s capital Tuesday kicking off his visit, Rouhani reiterated his belief that Iran must improve its relations with the rest of the world. But he also appeared mindful of the criticism that his presidency has focused too much on foreign policy, declaring, “We need to get past inflation, stagnation, high prices and unemployment and help unite this society.”

He underscored that theme Wednesday, telling soldiers during a military exercise in Ahvaz, “Building trust with regional countries and having constructive relations with them will only be valuable when we build our domestic strength as a nation.”Khuzestan, which borders Iraq, includes the site of Iran’s first oil discovery — in 1908 — and produces nearly half of the country’s output. It is home to many ethnic minorities, including the majority of Iranian Arabs, and faces perennially high jobless rates and significant environmental challenges.

“It is the center of our most important economic income sources, oil and gas,” said Saeed Laylaz, an Iranian economist and political analyst, noting that in recent years Khuzestan has seen considerable investment in dams, agriculture, and oil and gas fields. But, he added, “this province is still suffering, and there is always the danger of ethnic tension.”

Khuzestan was also one of only four provinces where Rouhani did not receive the most votes in June’s presidential election, coming in second to former Revolutionary Guard Corps commander Mohsen Rezaei, who is from Khuzestan. Like other Iranian border regions with large populations of ethnic and religious minorities, the province has historically aligned itself with opponents of conservative clerical rule.

Rezaei, who is considered a conservative, accompanied Rouhani on his three-day trip this week, in one of many gestures apparently designed to promote national unity.

“Rouhani was a senior security official for years and knows how sensitive this region is, and this trip was an acknowledgment of that sensitivity,” Laylaz said.

From the moment the president arrived in Ahvaz, a city of 1.5 million, crowds of supporters gathered, many dressed in the traditional robes of the local Arab population. Young people, many of them unemployed men, chased his motorcade on foot through the dusty streets, shouting slogans associated with reformist politicians.

Built along the banks of the Karun, Iran’s largest river, Ahvaz has been an important Iranian city for centuries, but in modern times it has suffered greatly from the effects of Iran’s long war with Iraq, as well as inefficient agricultural practices. It has some of the world’s worst air pollution and lacks clean drinking water.

On Tuesday, thousands of people filled Ahvaz’s Mosalla mosque to hear Rouhani deliver the main speech of his visit, part of it in Arabic. Many held up pictures of relatives who had been killed in the 1980-1988 war with Iraq. Others wrote their complaints and requests, along with their names and addresses, on sheets of paper, hoping that members of Rouhani’s team would collect them.

After the speech, many of the notes were discarded on the floor of the empty mosque, their contents reflecting Ahvaz’s troubled story. The most common pleas were for clean air, drinking water, lower prices and jobs.

“My son is out of work. So is my husband. He sold one of his kidneys last year just so we could survive, but we just keep struggling,” said Shahnaz Abassi, a 53-year-old housewife who attended Rouhani’s speech with friends. “We’re still extremely poor and waiting for a sign that things will improve.”

The sale of organs is legal in Iran, and some poor Iranians resort to it in desperate times.

Rouhani’s schedule in Ahvaz included meetings with local political and military leaders, women’s groups, university professors, the families of soldiers killed in the war with Iraq, artists, athletes, scientists and members of the clergy, all of whom seek support from the national government and often have conflicting agendas.

“You should know that domestic politics, with all of the complications that come along with it, is more difficult than international politics,” Rouhani said in remarks at Khuzestan’s main government building Tuesday, in an apparent nod to the conservative critics who accuse him of an overemphasis on foreign affairs.

Most observers agree that although solving Iran’s diplomatic problems was Rouhani’s first priority as president, a resolution of the nuclear dispute would be only a precursor to efforts to address domestic challenges, especially economic ones, exacerbated by sanctions over Iran’s nuclear activities.

“Provincial politics matter in Iran. Not all power flows from the capital center,” said Kevan Harris, a Princeton University sociologist who has conducted research on the Islamic republic’s economic and social policies in Khuzestan. “Rouhani won the 2013 election thanks in large part to votes outside of Tehran going his way.”