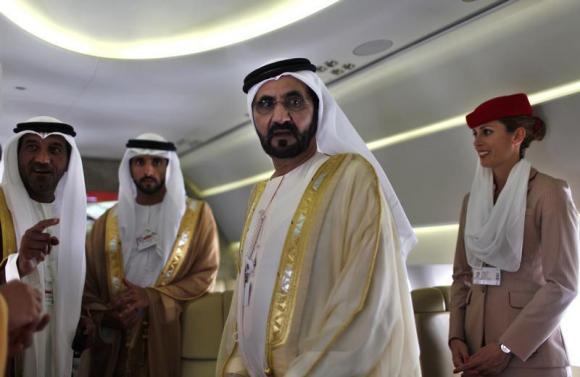 (Reuters) – The ruler of Dubai, a Gulf trade and investment hub with strong links to Iran, said in remarks broadcast on Monday that the international community should ease sanctions on the Islamic Republic.

Under a deal struck in November, Iran is expected to curb its nuclear activity in exchange for a limited easing of the international sanctions. The pact will come into force January 20, Iran and world powers agreed on Sunday.

Asked whether he thought it was time to lift the sanctions, Sheikh Mohammed bin Rashid Al Maktoum, who is also the Prime Minister of the United Arab Emirates, told British broadcaster the BBC:

“I think so and give Iran a space… Iran is our neighbour and we don’t want any problem, he said, adding that “everybody will benefit”.

Despite a decade of sanctions, Iran has managed to get most of the commodities and goods it needs via Dubai’s flourishing re-export market, although new embargoes imposed by the United States and its allies in late 2011 and early 2012 have hit it hard.

The vast majority of trade between Iran and its Gulf Arab neighbours is routed through Dubai, home to tens of thousands of ethnic Iranians and one of seven emirates making up the United Arab Emirates.

“I think they’re telling the truth when they say just for civilian power,” Sheikh Mohammed said in the interview.

SISI SHOULD STAY IN ARMY

Shortly after the November 24 deal, Iran’s foreign minister Mohammad Javad Zarif went to the UAE to try and improve relations with the U.S. ally.

Across the Gulf from Iran, the UAE stands to benefit directly from any easing of sanctions under the nuclear deal that have dampened regional trade.

Zarif met Sheikh Mohammed during his December visit and the UAE was the first Gulf Arab state to cautiously welcome November’s nuclear deal. The UAE foreign minister flew to Iran days later, calling for a partnership with the Islamic Republic.

The six Sunni Muslim-ruled members of the Gulf Cooperation Council (GCC) are wary of Iranian power in the Middle East, fearing the Shi’ite Muslim-led country is seeking regional dominance and stirring sectarian tension. Tehran denies this.

But they have also welcomed Iran’s “new direction” under President Hassan Rouhani and said Tehran should do more to promote stability in the region.

Sheikh Mohammed also said Egypt, which is due to vote on a constitutional referendum this week, was better off without Islamist President Mohamed Mursi who was deposed by the army in July after mass protests against his rule.

The UAE is deeply mistrustful of the Muslim Brotherhood and relations soured when Mursi became Egypt’s first freely elected president after the downfall of autocrat Hosni Mubarak in 2011.

The UAE, along with Sunni powerhouse Saudi Arabia, have championed army chief General Abdel Fattah el-Sisi who deposed Mursi, and have poured billions of dollars to shore up the country’s beleaguered economy since Mursi’s downfall.

There has been widespread speculation about whether Sisi, who is depicted by his supporters as a saviour who will restore stability to the shaken country, would run for presidential elections slated for later this year.

Sheikh Mohammed said Sisi was better off in the army, saying: “I hope he stays in the army. And someone else (stands) for the presidency.”

On Syria, Sheikh Mohammed said the UAE was only comfortable supporting displaced Syrians in Jordan and Turkey, as opposed to providing support to rebel groups, some of whom are extremist in nature.