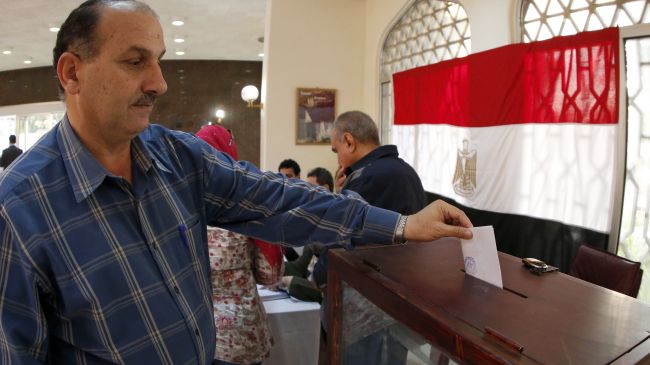 Egypt to hold referendum on constitution

Egypt is set to hold a referendum on a constitution drafted by the military-installed government, in what will be the sixth time Egyptians will go to the polls since dictator Hosni Mubarak was toppled in 2011.

More than 52 million people are eligible to vote in the two-day poll that is scheduled to begin on Tuesday.

The head of Egypt’s armed forces, General Abdel-Fattah al-Sisi, has asked Egyptians to support the rewritten constitution, which includes a ban on the formation of religious political parties.

Sisi has called on Egyptians to take part “in force” in the referendum, which he has described as the “first stage” in the implementation of a transition road map envisaged by Egypt’s military-installed rulers.

According to the road map, the constitutional referendum will be followed by presidential and parliamentary elections by the middle of this year.

Egypt has been experiencing unrelenting violence since July 3, 2013, when the army ousted the first democratically-elected president, Mohamed Morsi, suspended the constitution and dissolved the parliament.

Since then, anti-government demonstrations have continued across Egypt despite a heavy-handed crackdown on Morsi’s Muslim Brotherhood and its supporters.

Supporters of the former president have already called for a boycott of the vote on the newly-amended constitution.

Last month, the anti-coup alliance led by the Muslim Brotherhood said it would boycott the referendum, pledging to organize a campaign against the vote.