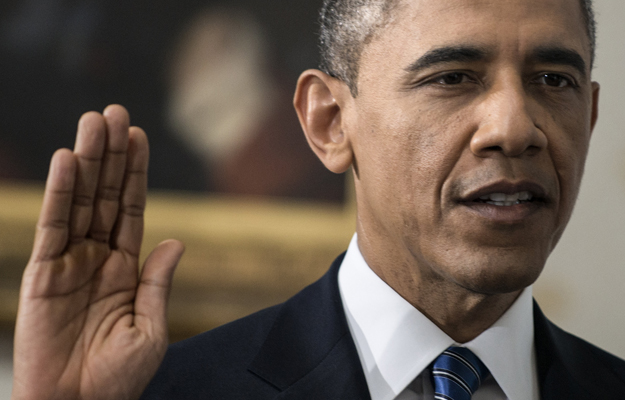 Despite an admirable intellect and dedicated support for US military personnel at war, former Secretary of Defense Robert Gates says President Barack Obama didn’t have sufficient faith in the troop-surge strategy he ordered in Afghanistan.

After months of debate with Gates and top advisers, Obama ordered a troop surge in Afghanistan in late 2009. Around 30,000 soldiers were to be the final push for stabilizing the war-torn country before a phased withdrawal starting in mid-2011.

Gates writes that after Gen. David Petraeus, then the central commander for both major wars, made public remarks suggesting he was not comfortable to setting a fixed date for the US military’s withdrawal from Afghanistan, Obama openly chided his military leadership for “popping off in the press” during a major National Security Council meeting.

According to Gates, Obama said, “‘If I believe I am being gamed …’ and left the sentence hanging there with the clear implication the consequences would be dire.”

Gates added: “I was pretty upset myself. I thought implicitly accusing” Petraeus, and possibly Chair of the Joints Chiefs of Staff Adm. Mike Mullen and Gates himself, “of gaming him in front of thirty people in the Situation Room was inappropriate, not to mention highly disrespectful of Petraeus. As I sat there, I thought: the president doesn’t trust his commander, can’t stand [Afghanistan President Hamid] Karzai, doesn’t believe in his own strategy, and doesn’t consider the war to be his. For him, it’s all about getting out.”

In addition, Gates said that during a contentious September 2009 meeting with White House staff on Afghanistan policy, he nearly stepped down.

“I was deeply uneasy with the Obama White House’s lack of appreciation — from the top down – of the uncertainties and unpredictability of war,” he recalls. “I came closer to resigning that day than at any other time in my tenure, though no one knew it.”

Gates was the lone holdover from Republican President George W. Bush’s Cabinet to serve in President Obama’s White House after the Democrat entered office in January 2009. He oversaw crucial moments of at least two major wars, in Iraq and Afghanistan, at the helm of the Pentagon, from December 2006 to July 2011.

Gates said George W. Bush’s White House squandered success during the early phases of the Iraq and Afghanistan wars. Yet Gates writes that he is not sure how he would have answered if Bush had asked Gates in 2003 whether war in Iraq was the right decision.

Gates praised Bush’s order for a troop surge in Iraq, which, with with the help of cash incentives, tampered down insurgent violence.

He notes that he and Bush’s second Secretary of State Condoleezza Rice were the only voices urging the President to close the prison at Guantanamo Bay, with no success.

Gates said Obama’s decision to send Navy SEALs to attack a housing compound in Pakistan targeting Osama bin Laden was “one of the most courageous decisions I had ever witnessed in the White House.”

His memoir goes to great lengths to convey how much he was concerned for US troops’ safety amid so much conflict, saying he has “an overwhelming sense of personal responsibility” for the troops he ordered into combat.

Gates said both Obama and Hillary Clinton admitted to him that their opposition to the Iraq war during their heated 2008 presidential primary campaign hinged on political calculations.

The former Defense secretary has glowing remarks for Cabinet colleague Clinton. He “found her smart, idealistic but pragmatic, tough-minded, indefatigable, funny, a very valuable colleague, and a superb representative of the United States all over the world.”

Not unlike other tomes written by former Cabinet officials in the past, Gates’ memoir, reviewed Tuesday by The New York Times and The Washington Post’s Bob Woodward, is chock full of political drama and internecine intrigue. For instance, Gates calls Vice President Joe Biden a “man of integrity,”but nevertheless says Biden led the White House staff’s supposed suspicion of the Pentagon, “poisoning the well” against military leadership.

“I think he has been wrong on nearly every major foreign policy and national security issue over the past four decades,” Gates wrote of Biden.

The White House released a statement Tuesday saying Obama stands behind Biden, a longtime US senator before joining the Obama administration.

“The President disagrees with Secretary Gates’ assessment – from his leadership on the Balkans in the Senate, to his efforts to end the war in Iraq, Joe Biden has been one of the leading statesmen of his time, and has helped advance America’s leadership in the world. President Obama relies on his good counsel every day,” National Security Council Spokesperson Caitlin Hayden said in the statement.

Gates also reveals that Obama nearly ordered a criminal investigation into disclosures on Iran policy published by The New York Times, and that once the White House pointed the blame at Pentagon officials, only Obama would “acknowledge to me he had problems with leaks in his own shop.”

Gates relays in a new memoir how frustrating it was for him, leading the US military at a time of two major wars, to have to battle a White House staff often intent on wresting control over war policy from the Pentagon. He says Obama’s inner-circle, most with only political or academic backgrounds, became “increasingly operational,” which resulted in “micromanagement of military matters – a combination that had proven disastrous in the past.”

Though he has served eight United States presidents, Gates says Obama’s White House staff was the most “centralized and controlling” about national security policy since the Richard Nixon administration.

“I never confronted Obama directly over what I (as well as [then-Secretary of State Hillary] Clinton, [then-CIA Director Leon] Panetta, and others) saw as the president’s determination that the White House tightly control every aspect of national security policy and even operations. His White House was by far the most centralized and controlling in national security of any I had seen since Richard Nixon and Henry Kissinger ruled the roost.”

Obama’s inner sanctum annoyed Gates so much, that he writes he was compelled to deliver a “rant” to national security staff who were making decisions about Libyan intervention policy without Pentagon insight.

A former CIA director under President George H.W. Bush, Gates said he admired Obama’s intellect and decision-making, adding that the President was not afraid to support positions “opposed by his political advisers or that would be unpopular with his fellow Democrats.” Yet Gates said there were times he questioned Obama’s commitment to advice from the Pentagon and to his own strategies once implemented.