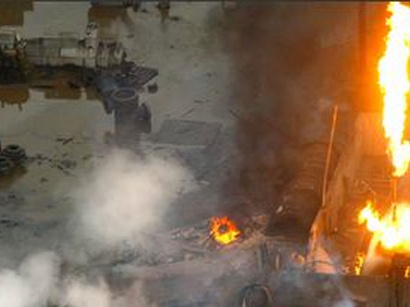 KHORRAMABAD, Jan. 4 (MNA) – A blaze in a gasoline tank in Khorramabad has killed one, injured two.

The blaze started in 10:30 AM local time in a gasoline tank, but successfully extinguished by the firefighters within half an hour.

Khorramabad’s local governor told Mehr News that the initial reports indicated that the fire had begun by workers welding in a 6000-litre gasoline tank in the vicinity of a petrochemical complex. Morteza Valipouri told that the event was under investigation, but that no definite verdict would be given as to the causes of the blaze.

“An investigation group has been assigned with the examination of the event and possible perpetrators will be publicly announced,” he added.

“The fire was extinguished very rapidly by the firefighters and the injured were transferred to a hospital in Khorramabad,” he said.

The head of Crisis Management office of Khorramabad told Mehr News that the fire had not damaged the physical structures of the petrochemical complex.

Reza Ariayi said that the gasoline tank was located in a safe distant from the petrochemical complex and the tank had been empty at the time when fire broke out, “all this helped the control of the fire possible,” he asserted.