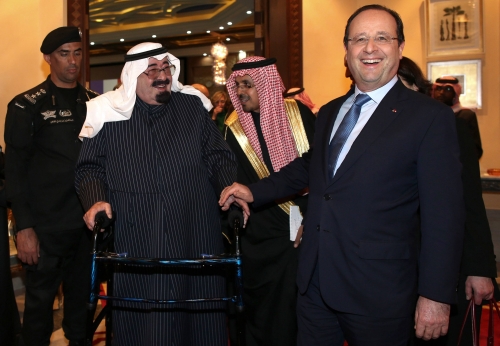 French president in Saudi for talks on Mideast crises

French President Francois Hollande and Saudi King Abdullah on Sunday held talks on escalating tensions in the Middle East, with a focus on Lebanon and Syria, during a visit also aimed at boosting commercial ties.

The monarch highlighted a “convergence” of positions between the two countries on several issues, a member of Hollande’s entourage said.

During the meeting Abdullah “expressed his concern, even anxiety, about regional crises — Iran, Syria, Lebanon and Egypt — and praised France’s courageous position on these key dossiers”, the aide said.

Lebanon was at the top of the agenda amid heightening tensions in Beirut after the assassination of former prime minister Saad Hariri’s close aide, ex-minister Mohammad Chatah, in a car bomb on Friday.

The two leaders, meeting at the king’s luxurious Rawdat Khurayim farm, 60 kilometres (37 miles) northeast of the capital, both expressed concern over Iranian interference in Lebanon and the region.

Paris and Riyadh share a “will to work for peace, security and stability in the Middle East”, Hollande said in an interview published in Sunday’s Saudi-owned daily Al-Hayat.

Hollande later met with Hariri, a strong critic of the Iran-backed Shiite Hezbollah movement, which is fighting alongside President Bashar al-Assad’s forces in Syria’s civil war.

Hariri, the son of former premier Rafiq who was assassinated in a massive car bomb in February 2005, lives outside Lebanon due to security fears.

In a statement Hariri highlighted “the importance of French support of the Lebanese state … in particular the Lebanese army.”

Speaking to reporters in Riyadh, Hollande pledged to “meet” any requests by the Lebanese government to arm the army.

His comments came as Lebanon’s President Michel Sleiman announced from Beirut that Saudi Arabia had pledged $3 billion for the Lebanese army to buy French equipment.

Lebanon’s armed forces are woefully under-equipped and face multiplying security challenges, underlined by the blast that killed Chatah, although officials played down any link with the Saudi aid pledge.

He urged the Syrian opposition to take part in a peace conference in Geneva in January aimed at brokering an end to the country’s civil war, an aide said.

Jarba said “100 a day, mostly civilians, including many women and children” were being killed in bombings by Assad’s forces.

The US-Russian backed talks dubbed Geneva 2 are aimed at reaching an agreement on a transition to end the war which has claimed an estimated 126,000 lives since March 2011 and displaced millions of people.

Syria’s increasingly fractured opposition has said Assad must step down as part of any deal, which Damascus rejects.

Hollande said he and King Abdullah were on the same page in terms of finding a “definitive solution” to Iran’s nuclear drive as well as on the crisis in Syria.

He reiterated that any transition in Syria “must not result in the prolongation” of Assad’s regime.

In his interview with Al-Hayat Hollande accused Assad of using the threat of fundamentalist fighters “to put pressure on the moderate opposition”.

Assad said this week that Syria was being confronted by a major offensive by Islamist extremists.

Radical Islamist groups have taken on an increasingly prominent role in the Syrian conflict.

Hollande also noted in the interview that Saudi Arabia has become France’s “top client in the Middle East” with trade exceeding eight billion euros ($11 billion) in 2013, including French exports worth three billion euros.

The balance of trade remains in Riyadh’s favour on the back of its oil exports to France.