have accused Iranian billionaire Babak Zanjani of corruption and called for an inquiry into his financial activities.

The legislators made the request in a letter to President Rouhani, Speaker of Parliament Ali Larijani, and head of judiciary Sadegh Larijani.

Zanjani’s estimated net worth is about $14 billion. His holdings and companies include the UAE-based Sorinet group, Qeshm Airlines, and the Rah Ahan Football Club.

Earlier this month, a Parliamentary report implicated Zanjani in claims of corruption, involving 138 companies, in the operations of the Social Security Fund.

The head of the Supreme Audit Court, Amin-Hossein Rahimi, said Zanjani’s role in transfer of oil revenues breached the law:

After sanctions were imposed against the National Iranian Oil Company, Iran had to export oil and they gave Babak Zanjani the task of exporting some of this oil worth around $3 billion. The problem is that they were supposed to get collateral from him by law and this was not done. This is a violation.

However, judiciary officials say no corruption case has been referred to them by Parliament’s Article 90 Commission, which oversees the performance of the three branches of government.

One of the MPs making the complaint, Abdolreza Azizi, said:

I understand that the sanctions were imposed against the country’s oil industry, but there were better ways than just depositing this much money into Babak Zanjani’s account. There should have been a representative from one of the supervisory bodies such as Majlis to oversee the issue. I believe this is a violation of our laws.

On the fourth anniversary of the Ashura protests challenging the regime and the disputed 2009 Presidential elections, the Supreme Leader’s office has tweeted about a dossier which proves the “sedition”: 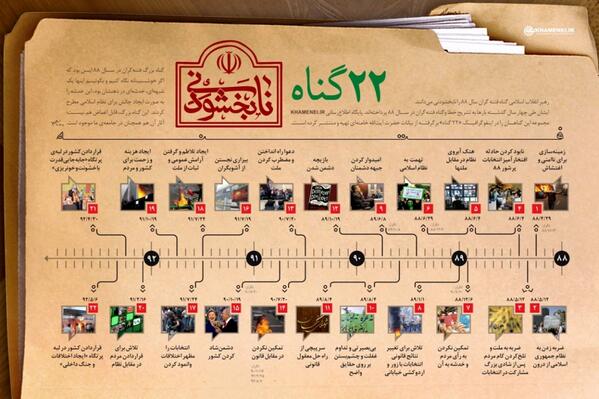 On the religious day of Ashura on December 27, 2009, thousands of protesters moved through Tehran, to the point of pushing back security forces who have suppressed demonstrations over the previous five months.

The regime responded three days later by calling out a mass rally of support.

Sign of the Economy: Layoff of 1,200 Bus Factory Workers

In a sign of the continuing economic challenge for the Rouhani Government,, the head of the Worker’s House in Senan has announced that 1,200 workers have been laid off from the Oghab Asfhan bus manufacturing company in the past year.

Almost 700 of the dismissals have come since September.

Habibollah Mohaqeq said the layoffs were due to financial problems caused by economic sanctions.

Oghab Afshan, founded in the 1950s, is the largest bus-manufacturing company in Iran’s private sector.

Mohaqeq said the company, which used to produce seven buses a day, now only makes one.

Amid a growing hard-line campaign against the “sedition” of the protests after the disputed 2009 Presidential election, a nine-volume “Encyclopedia of Sedition” has been published.

Pictures of 2009 Presidential candidates Mir Hossein Mousavi and Mehdi Karroubi — both of whom have been under strict house arrest since February 2011, as well as former President Mohammad Khatami, are on the cover.

On Friday, Fars News,linked to the Revolutionary Guards, put out footage from December 2009 demonstrations to portray the danger of “seditionists”, including former President Hashemi Rafsanjani’s daughter Faezeh Hashemi.

Saeed Mortazavi, former senior advisor to President Ahmadinejad and head of the Social Security Fund, has said he will sue Government officials accusing him of corruption.

Mortazavi’s lawyer announced that a suit will be filed against the Labor Minister and the head of Parliament’s Investigations and Auditing Committee for “libel and defamation”.

The head of Parliament’s Investigations and Auditing Committee dismissed the statements, saying Mortazavi cannot start legal action while the Fund is under investigation.