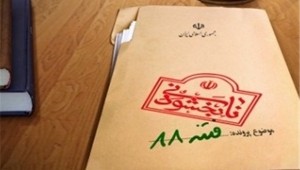 Nasim–The Supreme Leader’s office at Khamenei.ir has republished the Leader’s remarks about the fate of the leaders of the 2009 post-election unrest in Iran, saying that the Supreme Leader of the Islamic Revolution Ayatollah Seyyed Ali Khamenei has said that the heinous crimes of the leaders of the 2009 sedition in Iran cannot be pardoned because of the challenges they exerted on the Islamic embellishment.

In a reaction to recent rumors that the leaders of the 2009 unrest should be pardoned now that the moderate administration led by pragmatic Hassan Rouhani has taken office in Iran, the Supreme Leader’s office issued a poster at Khamenei.ir saying that the crimes of Hussein Mousavi and Mehdi Karoubi could not be forgiven given the challenge they exerted on the Islamic establishment of Iran.

Protesting the outcomes of the presidential election which kept Ahmadinejad in office as the president of Iran, Mousavi and Karoubi, two of the 4 presidential challengers, orchestrated an unprecedented uprising in the country which claimed the lives of number of protesters in the days that followed the election.