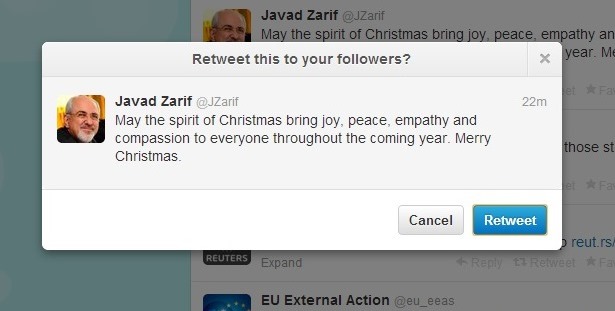 Iran’s Foreign Minister Mohammad Javad Zarif, noted for his diplomacy and engagement with the “West” via social media, has put out a Christmas message on Twitter:

May the spirit of Christmas bring joy, peace, empathy and compassion to everyone throughout the coming year. Merry Christmas.

Zarif seized headlines in September when he sent best wishes via Twitter to all Jews for Rosh Hashanah.

Meanwhile, the confusion continues over Hassan Rouhani’s editorial, written for a German newspaper, calling for better relations with the US as well as its Western partners.

Fars News claimed on Tuesday, citing Presidential advisor Mohammad Reza Sadeq, that the report of an editorial for Süddeutsche Zeitung is “completely untrue“.

However, Rouhani’s own Twitter message carried similar wishes to those in the claimed editorial.

And Project Syndicate, which is distributing and publishing a year-end collection of thoughts from world leaders, wrote on Twitter last night: