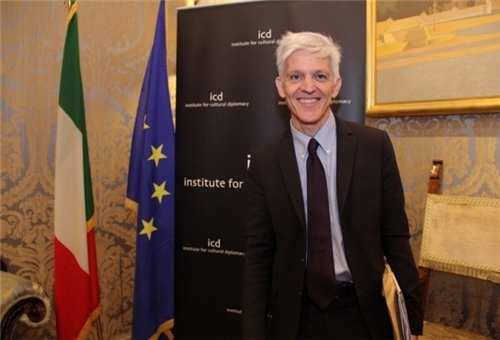 TEHRAN (FNA)- Italy’s Cultural Assets and Tourism Minister Massimo Bray, head of Senate’s Foreign Policy Committee and industrialists are due to visit Tehran in the near future as part of Rome’s policy for expanding all-out ties with Iran.

The announcement about the impending visit was made by Italian Foreign Minister Emma Bonino in a joint press conference with her Iranian counterpart Mohammad Javad Zarif in Tehran on Sunday.

“We hope that these visits lead to the development of the relations,” Bonino said.

She underlined Italy’s positive resolve to create a new atmosphere in ties with Iran, and said the relations between the Iranian and Italian people should further expand.

Bonino also expressed the hope that the relations between Iran and the EU would further develop, and said, “We should overcome obstacles and this is a long and arduous process which needs practice, attention and strong nerves.”

Bonino arrived in Tehran Saturday afternoon for an official visit which will include meetings with senior Iranian officials.

During his stay in Tehran, the Italian top diplomat is slated to exchange views with the senior Iranian officials on the latest international and regional developments and discuss ways to expand the bilateral relations.

On Friday, Iran’s Ambassador to Rome Jahanbakhsh Mozaffari said Italy is fully aware of the advantages of the expansion of bilateral ties with Iran where its companies can find eye-catching economic opportunities which cannot be found in any other place in the world.

Mozaffari pointed to a previous visit by Italian Deputy Foreign Minister Lapo Pistelli to Iran in August following the election of President Hassan Rouhani and said, “Italy, as a European country which dispatched to Iran the first delegation at the deputy ministerial level, has sought to play a pioneering role in relations with Iran.”

Bonino is also likely to meet with Director of Iran’s Department of the Environment Masoumeh Ebtekar and Vice-President for Legal and Parliamentary Affairs Elham Aminzadeh.

Mozaffari pointed out that Bonino is the first Italian foreign minister to visit Iran in nearly a decade and she will be accompanied by 20 Italian journalists.

Former Italian Prime Minister Massimo D’Alema was in Tehran earlier this week and had a series of meetings with high-ranking Iranian officials, including Expediency Council Chairman and former President Akbar Hashemi Rafsanjani.