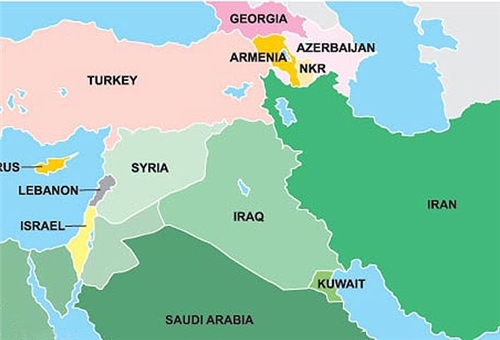 Azerbaijan calls on Iran to mediate in Nagorno-Karabakh dispute

TEHRAN (FNA)- A senior Azeri political activist underlined Iran’s experiences and abilities in facing regional crises, and called for Tehran’s assistance to end the Nagorno-Karabakh dispute between Azerbaijan and Armenia.

Karimli stressed that Azerbaijan Republic Vahdat Party has always supported Iran’s mediation to find a peaceful solution to the conflict between Baku and Yerevan, because of many historical, cultural and religious commonalities existing between Iran and Azerbaijan.

Referring to his meetings with Azerbaijan Republic speaker of parliament, members of parliamentary friendship group and executive secretary of New Azerbaijan Party, Jahangirzadeh said an important axis of negotiations had been Karabakh conflict.

He added that conflict in Karabakh is a sensitive issue for Iran and that Iran has always condemned foreign interference in domestic affairs of other countries and believes that borders of all countries should be respected by neighbors.

He expressed Iran’s readiness to help settling Karabakh conflict in direction of providing security and tranquility in the region, adding that since forming the Minsk Group, Iran has declared that the group does not have a suitable structure to solve Karabakh conflict between the two countries of Azerbaijan Republic and Armenia.

Despite facing strong international pressure, the Armenian and Azerbaijani leaders have failed to agree on the basic principles of ending the Karabakh conflict put forward by Russia, the United States, and France in 2011.

Armenia and Azerbaijan thus remain officially at war over Karabakh and the dispute is a major source of tension in the South Caucasus region wedged between Iran, Russia and Turkey.

No country – not even Armenia – officially recognizes Karabakh as an independent state.

The mountainous rebel region has been controlled by ethnic Armenians since it broke free of Baku’s control after a fierce war in the early 1990s that killed 30,000 people.