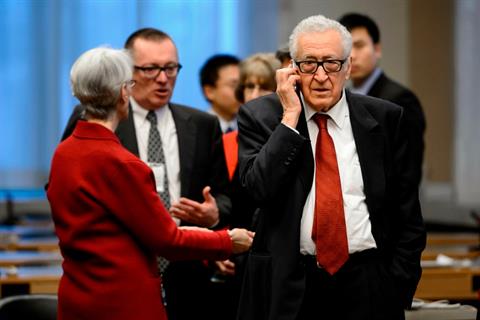 No agreement on Iran invite to Syria conference

GENEVA: The U.S. is blocking Iran’s participation at the Syria peace conference planned for next month but the other delegations have been agreed up and will include other regional players such as Saudi Arabia, officials said Friday.

The U.N.-Arab League’s Syria envoy, Lakhdar Brahimi, said about 30 nations would be invited to a day of speechmaking planned for Jan. 22 in the city of Montreux, and Iran’s participation was the only sticking point, but was still a possibility. The Syrian opposition also has opposed Iran’s involvement.

“The U.S. is still not convinced Iran’s participation would be the right thing to do,” Brahimi told a news conference after a day of meetings with the five permanent members of the U.N. Security Council – Britain, China, France, Russia and the U.S. – and Syrian neighbors Turkey, Jordan, Lebanon and Iraq. “Iran is not off the list for the moment.”

Along with those nations, other invitees include Algeria, Brazil, Egypt, Kuwait, Oman, Qatar and the United Arab Emirates. The actual negotiations between Syrian President Bashar Assad’s government and opposition representatives begin on Jan. 24 at the U.N.’s European headquarters in Geneva.

The meetings Friday included Russian Deputy Foreign Ministers Mikhail Bogdanov and Gennady Gatilov, whose country is Syria’s main ally, U.S. Under Secretary of State for Political Affairs Wendy Sherman and Syrian neighbors who have been struggling to cope with the conflict and the more than 2.3 million Syrian refugees.

Disputes over who should represent the Syrian opposition and government, and whether Iran, Saudi Arabia and other regional powers should be at the table, have blocked previous attempts to bring Syria’s warring sides for peace talks.

Russia’s foreign ministry said in a statement that Bogdanov, who is the Russian president’s special envoy for the Middle East, met Thursday with the Western-backed Syrian National Coalition’s Secretary General Badr Jamous and other coalition officials.