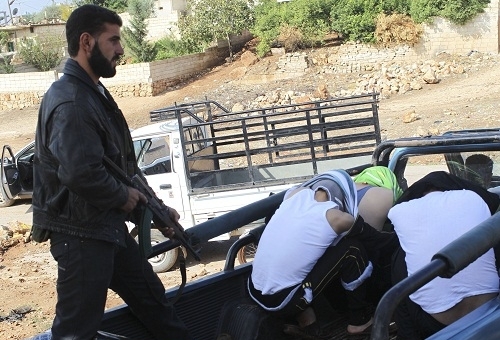 TEHRAN (Tasnim) – Over 80 civilians in a town northwest of the Syrian capital of Damascus have been executed by rebels, sources within the Syrian military told RT. Many others were kidnapped to be used as human shields.

Government forces are continuing a large-scale operation against Jabhat al-Nusra and Liwa Al-Islam fighters, who captured the town earlier this week. The area is located some 20 kilometers away from Damascus.

According to SANA news agency, around 1,000 militants were in the town when it was enveloped by the army on Friday.

The military sources said the “armed groups have performed an execution of civilians” in Adra, RT Arabic correspondent Abutaleb Albohaya reported from Syria.

“For now it’s established that over 80 people were killed in the areas now taken over by the army. Often whole families were murdered,” he said.

The number of executed civilians is expected to rise after government troops manage to recover the rest of the town – which has a population of around 20,000 – from the rebels, the military source added.

“Some families were kidnapped in order to be used as human shields in areas where the Syrian army is now trying to free the civilians,” Albohaya stressed. Iraqi Al-Ahd television says this is the reason the Syrian army is abstaining from using artillery on Sunday.

“The military sources also said that the other kidnapped families were moved to the area south of Adra in the direction of the town of Douma, which has been the opposition’s strategic backland since the start of the Syrian crisis (in March, 2011). It’s also where the most important rebel fortifications are situated,” Albohaya said.

The rebel presence remains strong in Adra, with “snipers entrenched in high-rise buildings,” he added. “Many opposition militant groups are still acting in areas outside and within the town.”

The army’s special forces have performed several successful operations against those groups, which have resulted in the deaths of dozens of militants, the military source said.

The military is storming every house and has already freed dozens of Alawite, Druze, and Christian families from the rebels, Al-Ahd reported.

The government troops have cornered a highway leading to the international airport in Damascus, which is situated four kilometers away from Adra.