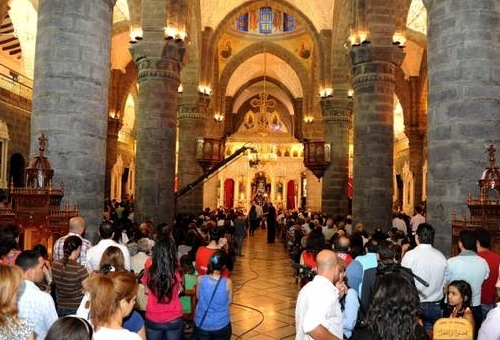 TEHRAN (FNA)- A Greek Orthodox Syrian bishop invited young Christians to take up arms to defend “the homeland” and the Christian presence in Syria against Al-Qaeda-linked terrorist groups who have been targeting all religious faiths and sects, except for Wahhabites, in the last two years.

In an interview published on the website of Panarab-Iraqi newspaper Azzaman, and republished Tuesday morning in several Middle Eastern media outlets, Bishop Luqa al-Khoury said, “Every Christian youth capable of taking up arms, should do so and defend Syria […] Christians are prayerful and peaceful, but it seems that today, faced with these people, prayer and peace aren’t enough anymore.”

The Syrian bishop confirmed his stance on Libyan TV’s LBC, saying that declarations attributed to him by Azzaman weren’t correct, but that, “in this situation, all methods of self-defense are legitimate.”

Al-Khoury added, “Syrian Christians won’t leave Syria by their own will, because they are attached to their land.”

“Christians and Muslims have been living (in Syria) for over 1,600 years […] Syrian Christians aren’t afraid even though the main goal of those who target the churches is to attack Christians’s historical identity,” he concluded.