“In 2003, Iran made an offer to the Bush administration that they would, in fact, do major things with respect to their [nuclear] program; they had 164 centrifuges. Nobody took that [deal] — nothing has happened.”

In making the case for the administration’s interim agreement with Iran on its nuclear program, Secretary Kerry has argued that it is important to make progress on rolling back Tehran’s nuclear program or else Iran will continue to stockpile nuclear material that may one day be used in a weapon.

As an example of the cost of inaction, he pointed to “an offer” that Iran made in 2003, shortly after the nuclear program was discovered, that he indicates would have stopped the program in its tracks. In other words, he suggests that the George W. Bush administration blew it.

The Fact Checker was The Washington Post’s diplomatic correspondent at the time and closely covered the negotiations with Iran. Let’s explore what is known — and unknown — about this supposed offer. Kerry’s statement is the first time any senior U.S. official has suggested the proposal was real.

On the eve of the U.S.-led invasion of Iraq, U.N. nuclear inspectors got their first look at a previously secret facility in Natanz and were stunned at what they saw. As The Washington Post reported on March 10, 2003, there were 160 newly minted centrifuges standing in neat rows, tested and judged fully operational. In a nearby building, workers assembled parts for 1,000 more centrifuges, part of a constellation of 5,000 machines that would be linked together in a vast uranium-enrichment plant then under construction.

Two months later, shortly after U.S. forces routed Iraqi troops and Baghdad fell, the State Department on May 4 received an unusual two-page document via fax from the Swiss government. It was unsigned, with none of the usual diplomatic markings. But it suggested Iran was interested in a broad dialogue with the United States, with  just about everything on the table, including full cooperation on nuclear programs, acceptance of Israel and the termination of Iranian support for Palestinian militant groups.

The Swiss ambassador to Tehran, Tim Guldimann, included a cover letter in which he said the document had the support of key power centers in Iran, including Iran’s supreme leader, Ayatollah Ali Khamenei. One player in drafting the “road map” for dialogue was said to be Mohammad Javad Zarif, then Iran’s U.N. ambassador and now Iran’s foreign minister. ”I got the clear impression that there is a strong will of the regime to tackle the problem with the U.S. now and to try it with this initiative,” Guldimann wrote.

The Washington Post first disclosed the text of the fax in 2007, and a copy is embedded below. The New York Times later published Zarif’s edits of the original Iranian document, which was supposedly transmitted to the United States through another intermediary. (Former congressional aide Trita Parsi says he gave a copy to then-White House aide Karl Rove.) 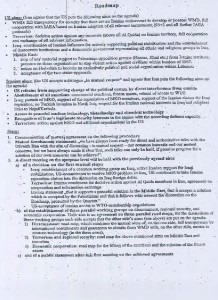 Whether the missive represented a genuine proposal has long been the subject of debate. Some mid-level State Department officials had wanted to test Iran’s unorthodox approach, but then-Secretary of State Colin Powell never forwarded any proposal to the White House.

Condoleezza Rice, at the time the national security adviser, told Congress in 2007 she had never seen the fax.

This is how a State Department spokesman officially characterized the fax in 2007:

This document did not come through official channels but rather was a creative exercise on the part of the Swiss ambassador. The last 30 years are filled with examples of individuals claiming to represent Iranian views. We have offered to Iran a chance to sit across the table from us and discuss their nuclear issue and anything else they would like, should they simply, verifiably suspend their uranium-enrichment activities.

Indeed, Powell’s deputy, Richard Armitage, told PBS’s Frontline in 2007 that not much weight was given to the fax because it did not match up with other signals at the time from the Iranian government.

It had been our view that the Swiss ambassador in Tehran was so intent — and I mean this positively — but he was so intent on bettering relations between “the Great Satan,” the United States, and Iran that we came to have some questions about where the Iranian message ended and the Swiss message may begin.

I remember talking with people from our Near East division about a fax that came in from the Swiss ambassador, and I think our general feeling was that he had perhaps added a little bit to it because it wasn’t in consonance with the state of our relations. And we had had some discussions … particularly through intelligence channels with high-ranking Iranian intelligence people, and nothing that we were seeing in this fax was in consonance with what we were hearing face to face. So we didn’t give it much weight…. If there had been a desire on the Iranian side to seek a better relationship, it would have been an ideal time afterward to send that signal, and we got no such signal to my knowledge.

(William J. Burns, who headed the Near East bureau at the time and was said to be skeptical, is now deputy secretary of state and spearheaded secret talks with Iran in the past year.)

Stephen J. Hadley, Rice’s deputy in 2003 and later national security adviser, was also dismissive. “In 2003, a fax purportedly from Iranian sources offering a diplomatic breakthrough arrived on a State Department fax machine,” he wrote in a history of the Bush administration’s dealings with Iran for the U.S. Institute of Peace. “It was later determined to be the result of freelancing by a Swiss diplomat hoping to be the one to make peace between Iran and the United States.”

Some former officials who wanted to test a dialogue with Iran did view the unusual missive as a missed opportunity, something at least worth trying even if it turned out to be nothing. “To use an oil analogy, we could have drilled a dry hole,” said Richard Haass, then head of policy planning. “But I didn’t see what we had to lose.” In September 2003, Iranian Foreign Minister Kamal Kharrazi, who was said to be involved in drafting the 2003 document, told The Washington Post that Iran was prepared to work with the United States on a range of issues, especially Iraq and Iran’s nuclear activities, if Bush administration officials were to “change their approach and bring in a new environment for cooperation.”

But outside skeptics, most particularly pro-Israel advocate Steven J. Rosen and analyst Michael Rubin, have offering compelling reasons for why the fax should not be viewed as a significant diplomatic gambit.

In particular, they noted that Zarif had had a secret meeting in Geneva with two senior U.S. officials — Ryan Crocker and Zalmay Khalilzad — just the day before the mysterious fax arrived at the State Department. It was the fourth such meeting that year — and came during a period of unusual and frequent discussions between Iranian and U.S. officials.

So the question arises: If Iran was serious, why would such an important diplomatic undertaking be transmitted in such a haphazard way through the Swiss ambassador when one of the supposed co-authors was already holding senior-level talks with U.S. officials? It’s possible Zarif was skittish about making such a “grand bargain” approach through official channels, but this puzzle has never been adequately answered.

As it happens, the May 3, 2003, meeting marked  the end of those talks with Zarif. The Americans had asked Iran to interrogate al-Qaeda-linked individuals in Iran regarding intelligence about a possible terrorist attack in Saudi Arabia. The Iranians failed to do so, and The Washington Post later reported that U.S. officials concluded that the Riyadh attacks, which took place nine days later and killed 35 people, were planned by al-Qaeda in Iran and ordered from there. The Bush administration abruptly terminated the discussions, and then U.S. officials became mired in a contentious debate about policy toward Iran.

That internal stalemate in Washington left the door open for three European countries — Britain, France and Germany — to begin negotiating with Iran over the nuclear program later in 2003. There was some initial success, including a freeze on Iran’s uranium-enrichment program that lasted almost two years. But eventually the agreement collapsed in 2005 — each side blamed the other — and Iran resumed enriching uranium.

In a speech late in 2005, the chief Iranian negotiator bragged that the Iranians had hoodwinked the Europeans, using the talks as a ruse to master key stages in the nuclear fuel process. Thus, he said, Iran was prepared to act when the talks broke down. He said that when the extent of Iran’s nuclear program was first exposed in early 2003, the Americans were at “the height of their pride and victory in Iraq” and so Iran had seized on any tactic that would delay consideration of the matter at the time at the U.N. Security Council.

The negotiator laid out Iran’s strategy:

If one day we are able to complete the fuel cycle and the world sees that it has no choice, that we do possess the technology, then the situation will be different. The world did not want Pakistan to have an atomic bomb or Brazil to have the fuel cycle, but Pakistan built its bomb and Brazil has its fuel cycle, and the world started to work with them. Our problem is that we have not achieved either one, but we are standing at the threshold.

The negotiator added that Iran “never wanted to move in [the] direction” of building a bomb.

Who was that negotiator? Hassan Rouhani, now the president of Iran.

“The secretary was reiterating that you can only test the potential of diplomacy through active diplomacy,” said Alec Gerlach, a spokesman for Kerry. “Many have pointed to previous opportunities to test Iranian intentions which, for various reasons, may not have been fully explored. We’ll never know what could have been possible had these diplomatic openings been tested fully, but we do know that the Iranian nuclear program marched forward in the intervening years.”

Since the 1979 Iranian revolution, the history of relations between the United States and Iran has been one of crossed signals and missed opportunities.

It’s quite possible the Bush administration acted too quickly in rejecting the efforts of the Swiss ambassador, though it is not surprising. After all, at the very moment the fax arrived, the United States was already engaged in senior-level talks with Iranian officials, so such an expansive third-party approach may have seemed out of left field.

But Kerry goes too far when he describes this as “an offer to the Bush administration that they would, in fact, do major things with respect to their program.” It was not an offer, but a vague listing of U.S. aims and Iranian aims to start off a diplomatic process — which came from the Swiss, not even from Iran. There were no actual specifics concerning the nuclear program; there is notably no mention of halting Iran’s nuclear ambitions.

The actual negotiations on Iran’s nuclear program, led by the Europeans, demonstrate how difficult it would be reach an agreement that might have halted Iran’s nuclear program — especially if Rouhani was not exaggerating when he claimed that Iran used the talks as a cover to make major advances.

We note that Kerry’s spokesman did not reiterate that this was actually an offer, but suggests it was merely an opportunity. That’s a huge difference in the world of diplomacy, and thus Kerry earns Three Pinocchios.