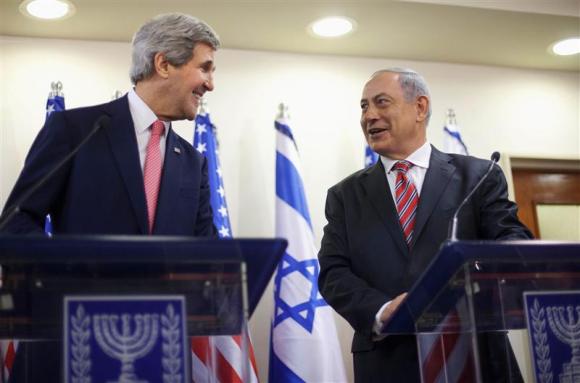 TEL AVIV, Israel, Dec. 6 (UPI) — No “daylight” is between the United States and Israel when it comes to ensuring Iran doesn’t get a nuclear weapon, Secretary of State John Kerry said Friday

Kerry spent about nine hours Thursday and Friday discussing Iran’s nuclear program and the status of the Israeli-Palestinian peace talks with Israeli Prime Minister Binyamin Netanyahu in Tel Aviv. It was the first time Kerry and Netanyahu met since the United States and five other world powers reached an interim deal with Iran over its nuclear program – a move Netanyahu has called a “historic mistake” that could endanger Israel.

“I am convinced that we have put forward a strong proposal, and now what we are doing with Israel is working very closely on what the final comprehensive agreement ought to look like,” Kerry told reporters after meeting with Netanyahu Friday. “Israel and the United States are absolutely in sync, not an ounce of daylight between us, with respect to the need to make sure that Iran cannot achieve a nuclear weapon … .”

“I believe Israel is safer today and we will approach this final negotiation with an absolute view about Israel’s security, Israel’s safety, the region’s safety, and our ability to stand up afterwards and say, this was an agreement that was good for the region, good for Israel, good for the United States, good for the world,” Kerry said. “That’s our objective.”

The agreement calls for the easing of economic sanctions on Iran in exchange for increased inspections and limits on the country’s uranium enrichment program, which Western leaders fear is to develop a nuclear weapon but Iran has maintained is for peaceful purposes. The deal would allow for more comprehensive negotiations about Iran’s nuclear program to be conducted.

Kerry said the United States believes that the first-step agreement “not only makes Israel more secure than it was the day before that agreement, but we believe it will take us closer to a lasting, peaceful, and comprehensive solution to the Iranian nuclear program. It is the best opportunity we have to resolve the international community’s concerns about Iran’s nuclear program.”

As negotiations advance, Kerry said the United States would be in consultation with Israel.

After the talks, Kerry said the leaders remain “as determined as ever” to negotiate a peace deal.

He said he believed they were “closer than ever” to realizing a two-state solution.

“Both parties have the same endpoint in their sights: Two nations for two peoples living side by side in peace and prosperity,” Kerry said. “But neither peace nor prosperity are possible without security, and the United States will only support a final status agreement that makes both Israelis and Palestinians more secure than they are today.”

He said he and President Obama were working with retired U.S. Marine Corps Gen. John Allen and defense experts “so that we can anticipate all of the threats to Israel’s security at every step of the final status negotiations process and work out ways to address those threats, as well as to address the complicated questions of security within a new state of Palestine and to deal with the issues of a viable independent Palestinian state and the security challenges that that presents.”

“Together,” Kerry said, “there is no doubt in my mind we can reach an agreement that will support the peaceful and promising Palestine that the Palestinian people deserve alongside a prosperous and a more secure Israel.”

“Madiba’s [a term of affection for Mandela meaning father] long walk to freedom gave new meaning to character and to courage, to forgiveness, and to human dignity,” Kerry said. “And now that his long walk has ended, the example that he set for all of humanity lives on.”

“He will be remembered as a pioneer for peace,” Kerry said. “[There] are some people, I think, in the course of life who truly – you meet and you are touched by them, and you’re forever changed by the experience. Nelson Mandela is one of those people.”