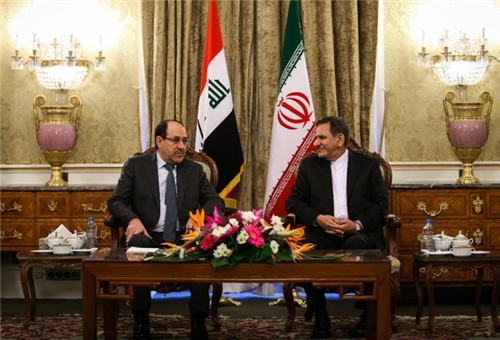 TEHRAN (FNA)- Senior Iranian and Iraqi officials, in a joint news conference in Tehran on Wednesday, stressed the need for the further expansion of mutual cooperation in economic fields.

During the news conference in the Iranian capital today, Iranian First Vice-President Eshaq Jahangiri and Iraqi Prime Minister Nuri Al-Maliki reiterated the necessity for increasing exchange of visits between the two countries’ businessmen and trade officials in a bid to further consolidate Iran-Iraq economic ties.

Al-Maliki noted that the two sides have agreed to increase reciprocal visits by the two states’ officials.

The Iraqi prime minister arrived in Tehran at the head of a high-ranking delegation on Wednesday and was warmly welcomed by the Iranian first vice-president.

During his stay, the Iraqi prime minister will exchange views over the latest regional and international developments with senior Iranian officials and discuss ways to strengthen the bilateral ties between Tehran and Baghdad in all spheres.