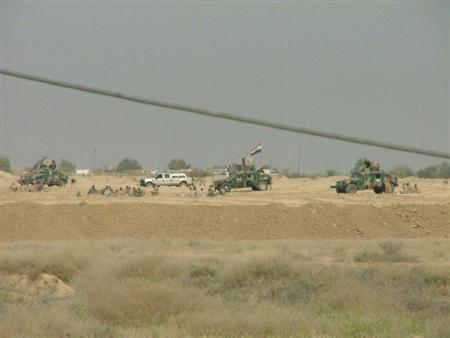 (Reuters) – Iraq is hunting militants, still unidentified, who led a deadly attack on an Iranian dissident camp near Baghdad and dismisses suggestions its own security forces were behind the violence, a senior government official said.

More than 50 people were killed at the dissident Mujahadin-e-Khalq (MEK) group’s Camp Ashraf in September in an attack the United Nations described as “an atrocious crime” and which drew condemnation from the United States and Britain. Assailants took time to conduct execution-style killings and plant bombs.

MEK, which the U.S. State Department removed from its list of terrorist organizations last year, wants Iran’s clerical leaders overthrown and fought on former Iraqi dictator Saddam Hussein’s side during the Iran-Iraq war in 1980s.

The group, which has accused Iraqi security forces of being behind the attack, is no longer welcome in Iraq under the Shi’ite Muslim-led government that came to power after U.S.-led forces toppled Saddam in 2003.

“The main thing that the investigations have revealed so far is that the Iraqi security forces were not involved in that attack and an unknown militant group was behind it,” said Haider al-Akaili, who is part of a government committee overseeing the investigation, which was demanded by the U.N.

Iraqi authorities have repeatedly denied involvement in the attack, in which camp residents also went missing. MEK says they were taken hostage by Iraqi forces and were flown to Amara province to be extradited to Iran.

Akaili, who is an official in Iraq’s Ministry of Human Rights, denied this: “Pictures of the alleged missing persons have been circulated to airports and checkpoints and we have not received any news about any of them,” he told Reuters.

The committee is headed by Iraq’s national security chief and includes representatives from government ministries and the intelligence service as well as the U.N.

Akaili added that 53 people had been killed, not 52 as originally reported by the U.N. which said its representatives had seen corpses with gunshot wounds and some with their hands tied. The additional victim had not been reported until now because his face had been burnt and he had not been previously identifiable as a camp member, Akaili said.

The last residents moved out of the camp to a new base in September. The camp had housed around 100 MEK members at the time of the attack.

Iraqi authorities have issued 148 arrest warrants for MEK members for crimes against Iraqis since 1991 but none have been arrested, according to officials.

The group which attacked the camp appeared to have had ample time to execute the victims as well as plant bombs in cars and buildings which it detonated remotely, Akaili said.

“The operation was elaborate, complicated and big,” he said, adding that MEK members who had seen the attack had shown a “serious lack” of cooperation with investigating authorities.

He raised the possibility that there had been a dispute within the camp and some of the attackers had come from inside it. Another scenario was that the seven missing people were behind the assault, he said.